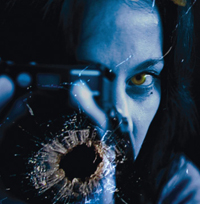 While the United States Government may have convinced people of some of the merits of the Vietnam War early on in the campaign, the public’s views rapidly changed when renegade journalists began sending back vivid and horrifying images of the brutality occurring on the ground; images capturing the intimate reality of war are an essential part of democracy, satisfying the public’s right to know and decide where to direct their support.

However, the job itself is fraught with danger, as well as personal and ethical dilemmas – Bare Witness explores at great depth how photojournalists navigate this rocky terrain.

The play centres around a young Australian photojournalist, Dannie (Daniela Farinacci) who enthusiastically ditches her position as a newspaper photographer covering your more mundane variety events, and somewhat naively takes on a position as a war photographer in Serbia.

Upon arrival in the country, she meets up with an experienced, multicultural group of fellow photographers - Jack (Adam McConvell), Violettea (Eugenia Fragos), Jacek (Todd MacDonald) and Jose (Ray Chong Nee), who quickly take her under their wing as she hits the ground running.

We then follow Dannie and her colleagues throughout their subsequent and interconnected careers abroad, with the narrative threaded together through the memories evoked from 11 of Dannie’s most significant and life-changing photographs.

Far from glamourising the profession, Bare Witness creatively captures the harsh reality and numerous pitfalls of war photography, revealing what it takes and the sacrifices that must be made to make it in this cutthroat industry.

The research that went into creating this production was also highly evident, with contemplation on the arguments surrounding the photographers right to ‘bare witness’ to the horrors of war, the detachment of the photographer from the subject and on the fine line between creating a commercially viable product and shining the light on injustice.

In attempting to capture both the inner and outer worlds of these gung-ho characters simultaneously, as well as their various adrenaline-fuelled realities, Bare Witness felt chaotic and overwhelming at times. This could arguably be the perfect representation of the frenetic life as a war photographer; however, the end result felt a little unfocused and disjointed overall – trying to encapsulate too many snippets of ideas at once.

The more surreal moments symbolising the internal landscapes of Dannie, Jack, Violetta, Jacek and Jose also seemed at times melodramatic and contrived, but this was balanced out with some incredibly poignant moments of creativity, using metaphor and montage to deliver some of the more alarming content.

While visually rich, Bare Witness is infused with an equally stirring soundscape by cellist, Kristin Rule. The haunting compositions provide the perfect ambience for the intense subject matter and seamlessly weave their way into the gut-wrenching environment.

Farinacci’s portrayal of Dannie morphing from the puff chested, sheltered Australian seeking some adventure, to the decisive and accomplished professional was convincing, and she offered some beautifully tender performances within Dannie’s moments of vulnerability.

McConvell, Fragos, MacDonald and Chong Nee all took good ownership of their respective main roles, utilising the opportunity and potential to develop and breathe life into this rag-tag bunch of veterans with panache.

Although Bare Witness initially feels like a work in progress that needs to be tightened, it does have a way of seeping in. Perhaps the complex, sensory-rich content is just a little too much to take in at once and needs a bit of time to process.

Overall, it’s a candid, highly original piece of work that splashes a cold bucket of reality on our media hungry world, exposing the toll on those who attempt to feed it.