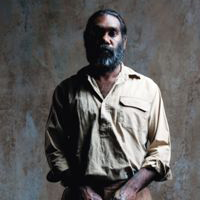 Exasperated, my friend turned to me after the show to express her thoughts on what she’d just experienced, exclaiming finally: “how do you unpack brilliance?!” To be honest, I’m not quite sure, but I’m going to give it a try…

Painstakingly researched and documented by writer and director, Scott Rankin, this extraordinary story of renown Indigenous watercolour artist Albert Namatjira, was originally captured by Rankin on a three hundred-page script. It was eventually refined down to the eighty pages of theatrical gold we see played out on stage today, with the guidance and advice of Namatjira’s family from West Aranda country in Central Australia.

Namatjira’s actual descendants also feature as a supporting cast for this production, including two of his grandchildren who are accomplished watercolour artists in their own right. While the story unfolds, they quietly set about bringing to life the stage backdrop, drawing a landscape of their home country in Hermannsburg, while chiming in and out of scenes with songs in language flavoured by ethereal wind instruments that are so angelic, you’re choking back tears.

The story weaves together the three formative influences that helped shape Namatjira’s world, from childhood through to his final days - namely, his family, the German pastor who helped raise him at the mission in Hermannsburg and his painting mentor, Rex Battarbee.

A great novelty to high society for a period in the early part of last century, Namtjira’s rise to dizzying heights in white men’s society proved to only highlight the enormity of the grinding poverty which affected his people in Hermannsburg.

Unable to refuse requests for assistance from relatives, his money and good spirits soon began to dry up as he supported more than 600 members of his extended family, and he plunged into his darkest depths before passing away from illness a penniless and broken man.

This was further exacerbated by the Government’s decision to grant him the country’s first Indigenous citizenship, in order to tax his wealth. And as much fanfare as there was from white Australian society about Namatjira’s status as a ‘model Aborigine’, and cultural icon, there was not enough goodwill to win him true equality within it.

However, this show does not wallow in tragedy or bitterness - rather, it celebrates two enduring friendships between white and black and a life well-lived with a jovial and uniquely Indigenous Australian humour. As Namatjira, Trevor Jamieson is phenomenal; a charismatic showman up there with the likes of Australian acting great, Geoffrey Rush. A gifted storyteller working his way through a Shakespearean pantomime, Jamieson captures each phase of Albert Namatjira’s life with the quality of a chameleon, transitioning across generations, cultures and characters with the ease of a master craftsman.

His larrikin persona had the audience in stitches, gently “taking the piss”, as they say, out of politically and culturally sensitive matters, but with a seeming intent to convey important messages regarding looming Indigenous issues in contemporary society.

There is much about this production that is still so relevant to remote Indigenous communities in Australia, and it is with shame that the issues raised therein are by no means relics from the books of history. The script no doubt made this conveyance a little easier, making enough analogies to celebrated Australian colloquialisms to endear the predominately non-Indigenous audience.

Jamieson’s rapport with the outrageously funny Derik Lynch, who plays most of the female characters in the show, is also a sight for sore eyes. Together they nail the slapstick element of the show and whip up a heady comedic cocktail.

It will be near on impossible to forget the surreal vision of these two men playing out the love story of Namatjira and his wife Rubina in the middle of the desert, singing Barry White with disco balls blazing above. And it’s actually even funnier than it sounds – but I’ll let you discover that for yourself.

When the lights faded at the conclusion of Namatjira and the cast relinquished their grip on the crowd, you could hear a pin drop, such was the impact. The uproarious standing ovation that followed when people found their bearings spoke much of Namatjira’s significance for our time  – this story was ripe for telling and it was told exquisitely.

Namatjira is playing at the Canberra Theatre Centre until September 17