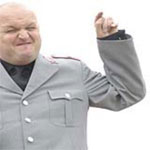 A One Man Political Farce

This curiously titled show is another wonderful production presented by Guy Masterson’s CIT, which – like a number of CIT’s productions – is a narrative about an historical political figure of some significance.  In this case, actor and co-writer Ross Gurney-Randall delivers a one hour insight into the mind of Italian fascist dictator Benito Mussolini.  The play concentrates on Mussolini’s flight from the Allies and Italian partisans and, like Adolf and I Elizabeth the central character presents an explanation about what he has done and why.  Needless to say it falls far short of a justification and serves to paint Mussolini as the absurd out-of-his depth political figure that he eventually turned out to be, despite his not insignificant self-education and study of the classics.  Gurney-Randall blends fact with black humour and intimidates the audience with his gesture and intense eyes as he moves Mussolini from the statesman who loved a stage to a cowering criminal.  It is a fine performance set on a minimalist stage with stark and evocative sound and lighting effects, and a collection of properties that are cleverly used to connect and drive the story.  This one is worthy of your attention.