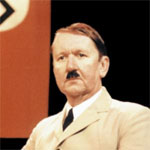 What a double bill!  A play about Hitler and a play about Shylock!  We see ominous large red banners with swastikas (at Customs: “Honestly, I’m doing a play!”) reminiscent of the Nuremberg rallies and then a bit of Wagner lilts through the cavernous auditorium of the Royalty.  An avuncular Hitler doppelganger arrives from central casting and underwhelms me with his meekness.  But this is a pot slow to boil.  By the end, I am in awe, I find the Furher fascinating - I feel I am in the presence of the man.  Pip Utton, the creator and performer of Adolf, has been doing it since the Dead Sea was sick.  We, the audience, are his final faithful in the Berlin bunker.  The Russians have overrun the city and Hitler has one last opportunity to justify himself.  He describes how he won and clung to power in a sort of update of Machiavelli’s The Prince.  How could anything he did be wrong if it was for the good of German people?  Is his view, only the German people are people.  Utton accurately replays the strong gestures and oratorical style that makes Hitler so spellbinding even in the black and white reels.  The most chilling aspect of this monologue is that Hitler actually put into practice all that Utton is telling us.  Otherwise, it could have passed for fiction… and that’s just the first part.

Utton downs tools, takes off the brown jacket with the swaskita armband and the moustache and wig, and bums a cigarette from an audience member.  He starts innocently, about cigarettes – perhaps forgetting that the Nazis in 1933 were the first government in the world to ban smoking in public places – and then things start to get nasty.

Utton conducts a long racist rant.  It begins rather mildly – a few flat jokes, some off-colour remarks (no pun intended), seemingly harmless stuff.  But ever so creepily, he slowly builds with more sinister remarks.  I say to myself, these things might be heard in an English pub, or a kitchen in Leeds, but not around here.  I honestly don’t know what to make of it.  Is he for real?  He seems realistically awkward and not funny, yet so unselfconscious, like he really believes this stuff about Jews, blacks, homosexuals, Muslims.  He even uses some of his Hitler gestures.  What an idiot!  He makes the usual right wing arguments about immigrants taking jobs and sending them home, about the Jews robbing the Palestinians of their land.  I’ve heard all this before, but gosh, this is unrelenting.  I’m starting to feel really uncomfortable.  Are people behind me walking out?  I want to walk out.  I don’t know if it’s real or not and I want to stop this guy.  It’s all rubbish.  Still, I know some people say this sort of stuff, I hope I don’t.  Then he says, see?