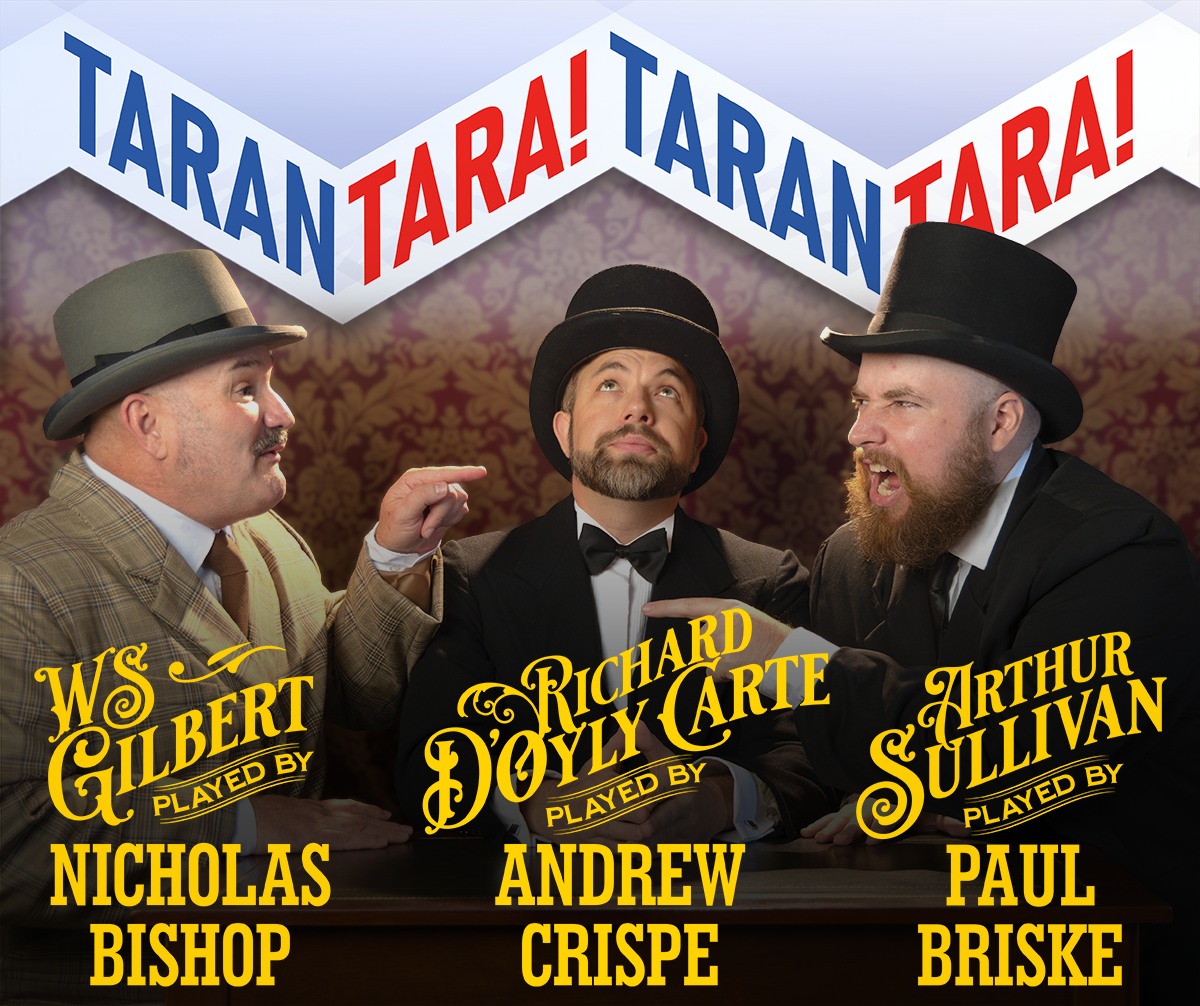 This G&S Season 2022 opener represents a huge amount of work for an absurdly short exposure. Just four performances. Blink and you’ve missed it.

Not that it is by any means the greatest triumph in the G&S panoply. But, it’s an enlightening diversion, an informative bio-show, and diligently performed by some substantial talent.

Of course, a semi-full opening night house made the mask-wearing and vax-proven audience members feel very relaxed and thus able to relish the entertainment.

The opening night performance started with a certain hesitancy but, as it ran into its bio narrative and the litany of beloved G&S songs from their many shows, one could feel the sense of contentment overcoming the audience. It is a very long show and would not suffer a bit of nip and tuck, but the audience stayed with it.

G&S have done shows with better production values. The frocks in Tarantara! are a bit of a grab-bag and, as W.S. Gilbert,  the wonderful Nicholas Bishop is flapping around in trousers capacious enough for several men. Wonderful fabric, of course. But distracting.

Paul Briske as Arthur Sullivan is more presentable in a long formal coat and classy Andrew Crispe as Richard D’Oyly Carte is a period fashion plate, exquisitely attired.   Nicholas Munday plays George Grossmith in a series of costume changes while darting from character to character. He takes on the most arduously tongue-twisting of the Gilbert lyrics, establishing himself as a talent to be watched on the Adelaide musical stage. Because of the complexity of the multi-operetta narrative, some ingenuity is required with costumes over costumes and hats and (ghastly) wigs, not to mention the myriad props for a large cast. It is an ambitious production at the best of times. And the two Snoswells behind the costumes made the complex changes seem easy.

Tartantara! Tarantara! is not a G&S creation. It was written by Ian Taylor as a musical play and it is about the famous trio and the hows, wherefores, and assorted stresses of their personal and professional stories. There’s plenty of suspense and, indeed, the reason for the downfall of their famous long-term collaboration is breathtakingly petty, and absurdly human.

Director Richard Trevaskis counts Tarantara! Tarantara! as a beloved show and this was his third production.  In this case he worked with Christine Hogden as musical director, and it is a brave feat since piano alone turns out to be very effective as musical accompaniment.

The ensemble shows the customary G&S high standards, good voices, good harmonies, and nice characterisations. On opening night, stage hand Grace Carter stepped into a major support role with absolute skill and charm. Around her were seasoned singers such as crystal-toned soprano Megan Doherty with Hazel Green and Vanessa Lee Shirley.  James Nicholson simply shone in his assorted cameos; a lovely singer with a spirited stage presence. Tenor Anthony Little perfected the harmonies from his role as a busy ensemble extra with Suriya Umpapthysivam another able chorus member.

The set by Tim De Jong and Vanessa Lee Shirley is a three-in one, representing the worlds of the three principal characters.  They are brightly coloured with highly detailed Victoriana decor and, with ragged black chasms between them, are designed to look as if they have been ripped asunder. For the comings and goings of the cast, those chasms work well. It is a very busy show.

You won’t be sorry.