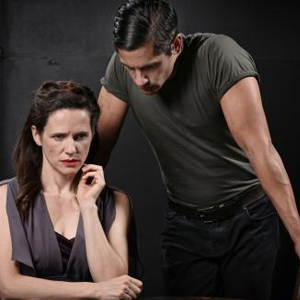 Poison riddled dreams, hope and reality are the sum of Tennessee Williams’ A Streetcar Named Desire.

Blanche Dubois comes to visit her married sister Stella in a state of undeclared denial and that very denial unleashes a torrent of destruction.

Director Michael Baldwin serves Williams’ text with a production ensuring dark and beautiful shades of Williams’ writing find expression in every way possible. This is a centrally powerful achievement. The writing sings, as the actors expressing it present lives that don’t have much as song, but desperation tinged with moments of joy in them.

Blanche’s arrival unleashes battles; within Blanche with herself; against her sister’s husband Stanley; and her sister in a less confronting way.

Once inside, her well educated, glamorous school teacher persona of the South grows. She fills the small space with her tales and old fashioned ideas sparking off Stanley’s (Paul Westbrook) ever growing antagonism and suspicion, and many times angering Stella (Justina Ward) with her put downs of Stanley.

This so powerfully grates against Stanley’s direct and basic masculinity there is literal smashing of plates and tears as the tiny two bedroom space all three share, (designed by Tammy Boden with support) cannot hold this turmoil in.

Salvation seems to appear for Blanche in the person of Stanley’s best friend and card night regular Mitch (Marc Clement). Between the curtains, as the boys play cards and the girls ready to go out, a spark fires between Mitch and Blanche.

This spark servers to bring into full focus the agonising battle of emotional extremes A Streetcar Named Desire is famed for. This is where the care in Baldwin’s direction seriously kicks in.

The battle between culture and working class ‘animal’ life has its origins revealed. In lost love. In death. In depravity. Dream versus ugly reality as Blanche eventually rehearses her demons on a fast track to madness.

Melanie Munt carries the weight of this magnificent production on her shoulders with profound insight into multiple layers of Blanche. She is brilliantly partnered by Paul Westbrook’s Stanley, a tough, no nonsense characterisation filled with earthy charisma hiding a subtle intelligence behind the rough bravado. Munt and Westbrook’s scenes together are must see stuff. Justina Ward’s Stella offers the perfect peaceful ordinary salve of a woman very happy in life, in love whose very peace shows up the overstrained spirits of her sister and husband.