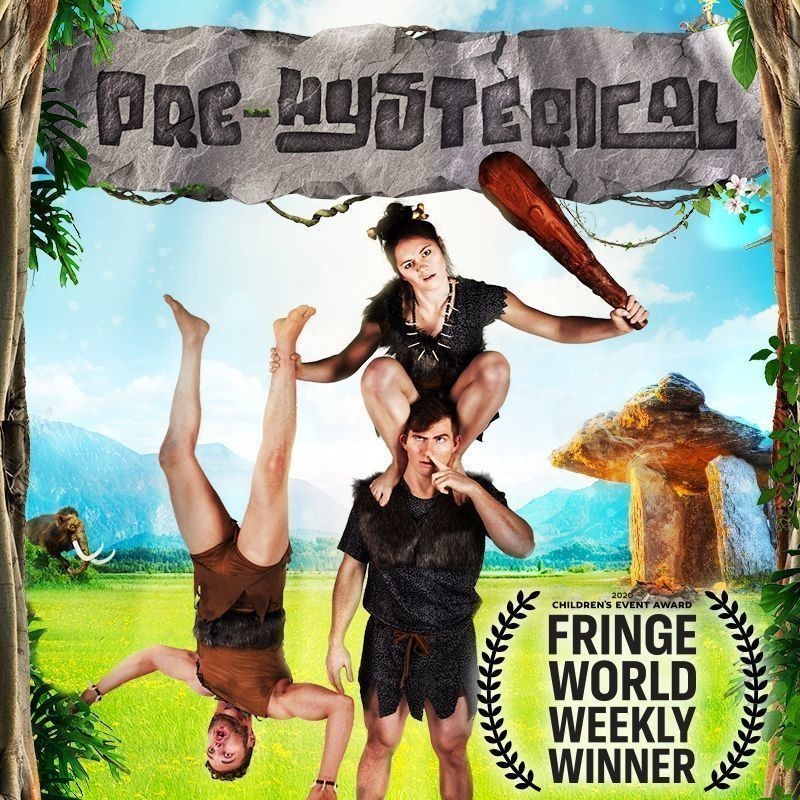 Three Neanderthals walk into a cave…

In PreHysterical there is no dialogue apart from “Roc”, “Ugh”, and “Oww” which by incredible coincidence are the names of the three. The first named is a woman, who is clearly smarter than the two men, so there is the first of the cultural jokes, not that a target audience of kids aged 5 to 12 care that much.

Before the acrobatics then, a brief sojourn into culture, since the references are there. We see the beginning of language (Roc, Ugh, Oww), the need for food (fruit) and hunting and gathering, and shelter including warmth from the fire. Fire may also be for protection as there’s a loud hungry tiger prowling around backstage.

As quickly as the three introduce themselves it’s into the action. Handstands become backflips and contortions; as the three meet each other the contortions become a sniffing circle (just like dogs). Yes, there’s a fart joke or two.

The quest for food involves crossing a river and avoiding the electric eels, and the use of a trapeze to get across the river was screamingly funny for many of the audience. Slapstick and acrobatics; highlights of an advanced culture. Hula hoops and a large [pretend] animal skull introduce a section on the development of ball games and sports. Did primitive soccer evolve from three Neanderthal kicking a skull around a cave?

Urg performs a brilliant routine on the Cyr wheel as the performance draws to a close, then has a dream sequence rudely interrupted by the tiger’s loud roar. A plan to trap the tiger with ropes leads to the introduction of the suspended slings, and on this apparatus Roc is superb. She is sinuous, lithe in motion.

We never do see the tiger but the way culture, communication (from performers to audience) and performance skills are combined make this show a winner. It moves and challenges, it scarcely pauses to draw breath, it keeps the kids engrossed.