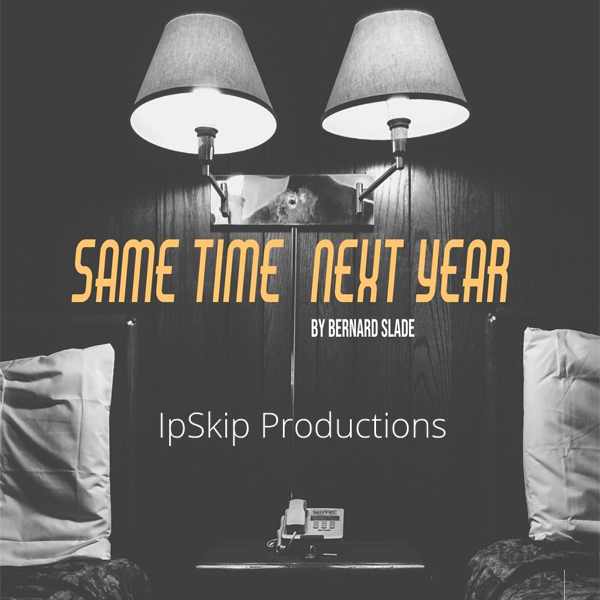 Infidelity as a history lesson. The premise of this 1975 play by Canadian Bernard Slade remains so wildly unlikely that Same Time, Next Year has kept its currency in the contemporary drama world, aided by the fact that it is a beautifully written piece of lightly comic theatre. Its unusual raison d'être shines from the stage under the sleek directorship of Jude Hines.

She has cast two extremely pleasing actors to portray the unlikely couple who, after an adulterous one-night stand, agree to have another assignation on the same day every year in the same hotel room. With the timeline of these scenes introduced by pop songs and news grabs and subtle updates to the set, including styles of telephones, the actors are required not only to be re-costumed for each scene but also to impart the moods, mores, and physical ageing of the passing decades.  These evolving portrayals from Patrick Clements and Allison Scharber, are achieved in a quiet tour-de-force of exquisite credibility. Clements’ George changes from a highly-strung and ambitious loudmouth accountant to a mellow academic while Scharber grows from diffident young mum to self-made powerhouse. It is vocal intonations, demeanour, hair and make-up which deliver these transformations - most especially in Clements who at first reminds one of Nick Cage on steroids.

The production is simply a delicious package of theatrical accomplishment in the hands of a creamy director with intelligent and skilled actors at her bidding. And, of course, an often pithy and always interesting script delivered with the expert embellishments of a Gary Anderson set, Stephen Dean lighting, and Ray Trowbridge sound. Oh, and dare one forget a couple of essential extras with Gillian Cordell aiding in the costumes and Daphne Quadrio behind the scenes as dresser for those myriad quick costume and hair changes.

Bless them all, and the cherished Bakehouse Theatre which has been giving audiences some of the best experiences of atmosphere and intimacy that any theatre in Adelaide has yet achieved.  If only this seamless and snappy work could have had a longer run. And, the Bakehouse, too.