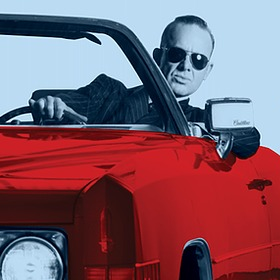 A thrill runs through the theatre as the lights rise on David Mealor’s production of Glengarry Glen Ross.

It’s an impeccable opening moment set in a booth in a Chinese restaurant with a backdrop of aptly symbolic red curtains. It is downstage, close to the audience in the Bakehouse Theatre. Two men occupy the booth. One drinks Scotch. The other eats noodles. And, almost before the first breath, the power games begin, not just from the David Mamet plot but because of powerhouse performances.

Rory Walker plays salesman Shelly Levene, and he’s on a downward spiral in a very dodgy real estate company. Desperate and dishevelled, his huge tie loose and awry, he is running off at the mouth and scrambling for support from the sleek new boss. From his first rushed utterances, it is clear that Walker is inhabiting this character to the depths of his contemptible essence. He is so credible that watching him feels quite voyeuristic. It takes less than a moment to recognise that this is a superlative performance; one which is sustained and developed as the play evolves.

Across the table, the boss who clearly gained his position from some form of nepotism, responds to Shelly’s pleas with smug superiority. Bill Allert portrays this ugly manager with an aura of supreme self-satisfaction and an impressive repertoire of quince-faced expressions.

Mamet sets up the characters with three of these across-the-table interactions so that one understands the tensions - the business principle of salesmen competing for top sales and a Cadillac prize, with the hapless losers facing dismissal. It’s a cruel field, counted out on an office blackboard and controlled by the boss who provides precious “leads” to the prospective sales. It is all based on the playwright’s own experience in this predatory world of dodgy real estate dealers.

Hence the shameless wheeler dealing of the characters and the charming duplicity of the top dogs, notably Richard Roma who gains a larger-than-life embodiment from the remarkable Mark Saturno who devours the stage in a tour-de-force performance.

He is one of the layers of excellence David Mealor has achieved in this splendid production. He has audience eyes glued to Christopher Pitman, sad and funny as the over-the-top conspiratorial agent, Dave Moss, against the frightening despair of his colleague George, as so vividly portrayed by Nicholas Garsden. James Wardlaw plays the hapless sucker, James Lingk, who has fallen for the fast-talking real estate dealers. Poor Lingk is trying to weasel out of the deal. As smarmy Richard plays swings and roundabouts with him, the audience cringes in recognition at the entire phenomenon of the power of smooth-talking conmen. It hits a raw and universal nerve - one of the reasons that this 1980s play has maintained its relevance.

Desperate measures by frustrated salesmen result in the police being called in to the business, in which capacity Chris Asimos plays the one blameless outsider, a policeman investigating a break in at the office. The power of good carries a gun, of course. This is America, in which context the cast uniformly do their raging and moaning in impeccable American accents. And, to their ghastly tan plaid socks, they are besuited to the period.

The slick professionalism of this Brink and Flying Penguin productions presentation is completed by the finesse of Tom Kitney’s lighting and Quentin Grant’s soundscape. Not for a moment forgetting Kathryn Sproul’s set design which not only recreates a classic Chinese restaurant scene but, with astonishing flurries of movement in the shadows and masked spectres of US presidents of yore, transforms the stage into a smoky 1970s downmarket office complete with slow-moving ceiling fan and, of course, the crucial chalk board on which the destinies of the real estate agents is marked out.

One way and another, David Mealor and his team have achieved the complete package in this production.

One might give it five stars and then some.