The Triumph of Man 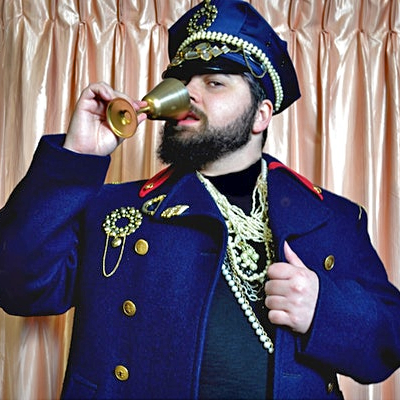 The Triumph of Man is a new play written by local playwright James Watson who is honing his craft through a Masters in Writing for Performance at NIDA. In his short career he has been quite active with a number of works already under his belt that have been aired by University of Adelaide Theatre Guild and at the Adelaide Fringe. James is the recipient of a State Theatre Company of South Australia young playwrights award and has several works published on Australian Plays Transform.

The Triumph of Man is essentially a farce in two acts, with each coming in at around one hour.   It is expansive in its conception and addresses a number of uncomfortable ‘truths’. The story focusses on how the fictional dictator of a fictional nation keeps his regime intact through the secretive suppression of dissenters and by spreading his propaganda through performances of a play he has written. He kidnaps two foreign actors to lead the performances, which may sound absurd but is in-fact, informed by real events surrounding South Korean filmmakers Shin Sang-ok and Choi Eun-hee who were kidnapped by Kim Jong in 1978 and forced to make propaganda movies for the North Korean regime. There are of course less dramatic examples in history of artists being used for political purposes such as Guy Sebastian being paraded by PM Morrison to help spruik the federal government’s bungled arts rescue package. Sebastian later expressed his embarrassment at being used “as a prop”.

The Triumph of Man explores how the arts and particularly the performing arts can be (and are) exploited for political purposes. This of course is not a novel idea and has been explored many times before, and this play doesn’t really add to that canon. The particular story line about the kidnapped actors is however new and fertile territory for exploration, but Watson doesn’t perhaps make as much of this as he might. The story line frequently crosses over into previously travelled territory and becomes cliché. This has the effect of reducing the potential impact of the narrative and slows it down.

Director Mary Angley identifies the absurdist aspects of the script and capitalises on the manifest abilities of the acting ensemble to milk these moments for what they are worth, but the sprawling text doesn’t easily assist in identifying reasonable bounds. Interestingly, Reggie Parker’s (mostly) excellent soundscape occasionally juxtaposes quite dark and foreboding sound sequences with lighter moments in the play. This has the effect of leaving the audience responding to questions that the music perhaps should not be asking. The lighting plot and set are simple and never distract from the play itself.

Arran Beattie is excellent as one of the kidnapped actors. His portrayal includes a carefully balanced mix of humour, fear, hesitancy, and resignation. Christian Best plays the other actor in a more naturalistic and underplayed manner, and as such demands to be listened to in a different way. Grace Boyle plays the dual roles of Ivana and Erasmus with much energy and expression, but frequently becomes ‘shouty’ as Erasmus, which is uncomfortable in the RUMPUS performance space. Ellen Graham as Axelle crafts a compelling character. We feel her rage, anguish, and pain. Poppy Mee also plays dual roles, and as Artemon she oozes authority and foreboding. Yoz Mensch also essays dual roles, and clearly delights in playing the role of the dictator giving a balanced mix of menace and unhinged mania.

The Triumph of Man is a wild ride, with twists and turns that both please and irk.