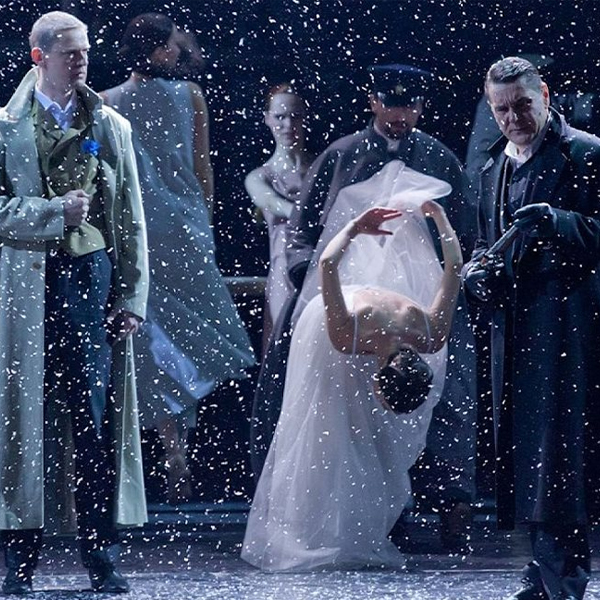 You’ve got to be quick with the Festival’s live streams of theatre – Medea and Eugene Onegin - because they’re on for only one night. This Australian exclusive event was sold out to boot, and that’s even when seating doubled due to easing of the Covid restrictions. A lively chat between our Neil Armfield and Rachel Healy and their counterparts from the Vakhtangov Company made one realise the whole concept is awesome. However, horrible delays and echoes due to technology plagued the conversation, but we were assured this would not happen during the performance itself. And it didn’t. The live transmission was flawless, and the gigantic, proscenium-filling image was of amazingly high resolution. This is the next best thing to being there and it is priced accordingly. There are two great benefits to this streamed theatre event: the showing is edited on the fly providing great close-ups, and zero carbon footprint. Before performance, the cameras were pointed on the audience, which looked remarkably like one of ours, and I’m so glad Russian theatre life wasn’t bombed into the Stone Age as a consequence of the Cold War. Their audience was sparse; there is an epidemic after all, but more pertinently, it was 11:30 am in Moscow.

Alexander Pushkin dates from the early 19th Century. His Eugene Onegin is a novel in verse and considered a classic of Russian literature. Chekhov comes later and it’s clear now to see Pushkin influences in his plays. Traditional analysis labels the eponymous character as the protagonist but Lithuanian Rimas Tuminas (idea, script and staging) firmly focuses on the unrequited love of Tatyana and makes Onegin her antagonist.

Black – imparting gravity and seriousness - is the colour of this production. Black dominates the set, the men’s formal apparel and the distorting imperfect mirror upstage, and bleeds into the overall moodiness led by the characterisation of Onegin. The simple virginal white gowns of our heroine, her cheery sister, Olga, and of the playful chorus of womenfolk, is in thematic contrast to the menfolk. Yet the play is not without humour or whimsy. Tuminas sprinkles the theatre magic with characters that can suddenly leap a metre into the air or break into song or dance or play an instrument. Objects are animated, furniture is hefted around and a swirling snowstorm and surreal playground swings are enrapturing. Symbolism abounds in such creations as a mandolin-strumming pixie, a spell-bounding bunny, and a gruff, hard drinking, aging Hussar as a narrator. Tuminas creates scenes of enchantment beside sweeping grandeur next to intimate feelings. The breakdown of Tatyana from her multiple rejections by Onegin wonderfully ranges from a teenager’s pillow bashing to tearful dissolve followed by a return to dignity. Bravo! Another brilliant device of Tuminas is that the poem is set in flashback and we have younger historical versions side-by-side with the “present-day” major male characters. The swagger of the young Onegin who rejects Tatyana for a life of frivolity is contrasted with the older Onegin. The tableau of the broken Onegin, finally himself rejected by Tatyana, coiled in his parlour chair and ruminating on a future of loneliness, is indelible. Eugene Onegin is a morality tale and a tragedy in bringing about one’s own downfall, yet in this production, it is also a buoyant story of a young woman reclaiming her value, recovering her dignity and maturing into a person of integrity.

The Muscovites gave the troupe a standing ovation, yet we didn’t in Adelaide. I’m sure we would have if they were in Her Maj. Vakhtangov, wish you were here! Bravo!