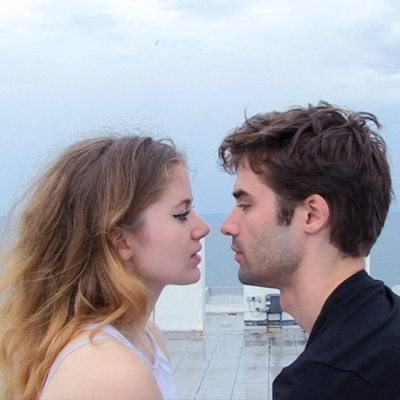 Samira Elagoz was born in Helsinki in 1989 and identifies as a Finnish/Egyptian film maker. Since 2014, she had been making award-winning visual art, including her first feature film, Craigslist Allstars, and this narrated documentary, Cock Cock…Who’s There? from 2016. Cock Cock… was winner of the Prix Jardin d’Europe at Vienna’s ImPulsTanz in 2017, and also took the Total Theatre Award at the 2018 Edinburgh Fringe.

Elagoz was raped six years ago and after a year of recovering – on her self-described “rape anniversary” - she commenced a project of filmed conversations of her family’s and friends’ response to the rape. This turned out to be the most benign segment of the documentation. She ratchetted up her research to document her first encounter with men harvested from advertising websites catering to adult services, and later, to document her first kiss with such the same. It’s not as cut and dry as that – there is a film of a man sucking his own cock and some footage of Elagoz’s button-like nipples. She informs that these filmed encounters take place under conditions made safe, yet completely intimate.

Part-way through her “research,” she meets American photographer Richard Kern in New York, soon after her second rape in Tokyo, and reveals that he bragged to her how he has sex with every one of his models. With a hint of jealousy, Elagoz laments how unfair that was; that he can safely have sex with any one, any time he wants, while with her, any sexual encounter can rapidly spiral out of control. I could not possibly know Elagoz’s mind, but it appears as if she thought: How can I interpret my rape through a project where I can safely meet and possibly have sex with as many strangers as I want, record the evidence while saying I’m presenting the female gaze, and then make a narcissistically super-indulgent documentary – a kind of never-ending selfie – showing what a desirable cock-teaser I am, like I’ve been doing since I was 10. And then convince award committees and festival directors that it’s cutting edge and not angst-ridden self-promoting propaganda.

In Elagoz’s show, I was reminded of Eckhart Tolle’s concept of the pain body - how the pain body likes to spread its pain. Elagoz is a great case of the victim becoming the perpetrator and perpetuating that pain. I felt used and maybe that’s her point.