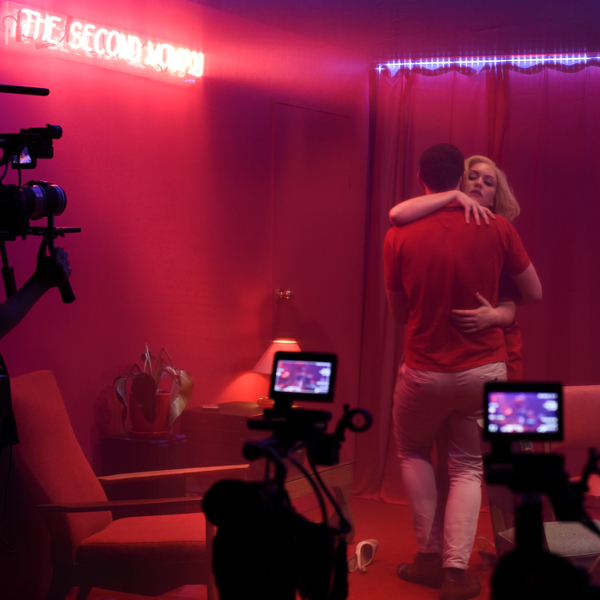 No. This cannot, must not be the last airing of this epic theatre work. It is too important. There are too many people who need to see it.

The Second Woman is a 24-hour production in which one not only sees an exceptionally accomplished and perspicacious performer but also a series of a hundred vignette performances by men of all ages and backgrounds playing a short but profound scene depicting the termination of a relationship.  The actress is Nat Randall and she has devised this endurance work with Anna Breckon, inspired by a 1977 John Cassavetes film, Opening Night.

Randall, in a Hollywood blonde wig, plays Virginia, a world-weary actress who seeks some confirmation of meaning in her jaded relationship with her husband, Marty. It is just one short scene which opens as attempted reconciliation. Bringing a take-away meal, Marty comes to apologise for his earlier behaviour.  Virginia has been drinking. Marty pours them drinks and, over the box of Chinese noodles, Virginia challenges him for some signs of integrity in their relationship. She wants recognition of her beauty and capability.

This brief scene is played over and over, each time with a different unrehearsed man. How each man delivers his prepared lines and responds to opportunities for improvisation provides what turns out to be a breathtaking and, for some, life-changing panorama of the male of the species. The longer one watches, the more evident become the patterns of male response to the woman in crisis and, predominantly, this is a game of power.

The scenes each take five to seven minutes book-ended by Virginia’s patient tidying of the set to loud reiterative piano music. She is on her knees, fastidiously domestic, picking up after the men, putting rubbish in bin, replacing drinking glasses, creating order in her little red room before she sits once again and, with stoic poise, re-establishes her equanimity before the entrance of the next man.

Then, once again, she walks to the far corner of the little red neon-lit box room set and gazes upwards, her passive expression, not to mention her exquisite movie star beauty, filling the big screen.

Two videographers work in symbiosis to deliver the intimacies of this work, thus giving the audience cinematic nuances of expression. As the repetition of scenes evolves, these subtleties become more significant, especially for those audience members able to see large portions of the 24 hours.  Audience members are allowed to come and go. This critic managed two four-hour sessions and found it extremely hard to leave the theatre at all, so utterly compelling had the experience become. One has grown to know Randall’s responses, but never quite to anticipate them. For each man, she has a reactive freshness, even in the early hours of Monday morning when her exhaustion shows through, just for a while, before, after a certain challenging version of Marty, a burst of adrenaline seemed to bring her a fresh wind and hours more extraordinarily focused performance.

Randall is able to make almost instant assessments of the arriving men. Thanks to the big screen, one sees her eyes widen or narrow, one sees the dimple of amusement or the bland gaze of resignation. The length of the scenes depends on the man and their interaction: how he makes his entrance, how he pours the drinks, handles the noodles and how he interacts in the final dance. One is aware of the extreme nerves of some of the men and the encouraging looks Randall gives them. She is not so simpatico towards those who try to be too smart or who try to top her.  One soon becomes aware of the ineptitude of modern men, generally. This production showcases a broad ignorance of fundamental etiquette, especially among the young. They serve drinks with their fingers over the rims of glasses.  Few ritualise the drinks with a raised glass, “cheers” or clink. They serve themselves before the woman. Very few indeed show concern when she stumbles.

It is surprising how many of the men seem more interested in the food than in the troubled woman in front of them. They bring takeaway Chinese noodles and chopsticks in a paper bag and are expected to unpack and share them.

The volunteer men have been told to expect food but not that it is to be thrown in their laps, dropped disdainfully on their heads, draped across their shoulders, tucked into their pockets, squeezed into their hands, spread on their knees…  Different men provoke different noodle treatment, but they all get noodled one way or another. One or two are amused, many are baffled, some are just irked and one or two have difficulty suppressing their ire.

The men come and go. As the hours wear on, there is a rhythm to it. What at first seemed slow, now seems faster: the piano music; the tedious, almost servile cleaning up of the noodled room; Virginia’s interludes sitting on her chair, resigned, patient, in slightly restless limbo.  As the videographers step forward, she rises to take her place. The cameras show a close up on her face. The door opens. Another man enters.

Some of them try a bit of power play. In one case, it is quite alarming. The man assumes a vice-like grip around the woman’s waist for the dance and is not releasing her.  Nat Randell is not a small woman. She towers over many of the men and, when it comes to one trying to overpower her, she surprises with her ferocious strength and not only detaches the clamped man’s iron grip but then brings him to the ground, pins him down, and keeps him there. It is a serious humiliation for this volunteer who seems to be seething with anger and shame. She gives him a little time to recover before she resumes the script, proffering a $50 and cooly commanding: "Marty, I think you should leave.”

Most men take the money. They have a choice of finishing the scene with “I love you” or “I never loved you”. Over 8 hours, it seems to fall about 50/50.

As audience members leave, remaining audience members change seats to get the best vantage points right in front of the little boxed red room with its softly veiled front and deep red curtains. People start to talk to each other between the scenes. Endurance brings bonding. Were you here last night? How many hours have you done? They compare love-hate emotions towards the men. They recognise some of the men coming to sit in the house after their appearances. They also recognise one man who was in the house and is now on stage. Preparation was not an advantage; he does not fare well with Randall. A professional actor turns up. With all that stage experience, the only way he shines is on his exit. He lingers with true regret.

As the hours roll on, the largely female audience grows closer and closer to Randall, reading the nuances of her expression, gasping, sighing, laughing with her and for her. Their empathy is total.  She seeks the confirmation that they secretly or not, have sought in relationships. Her exasperation is their exasperation. She has become "everywoman”. And this profound, shared experience will remain with us for ever.

One wants to tell the world. One wants everyone to have seen it.

But Randall has said it will not be done again.

We who were there consider ourselves very fortunate.

And, once again, we thank our Festival of Arts for delivering such rare jewels of theatre.