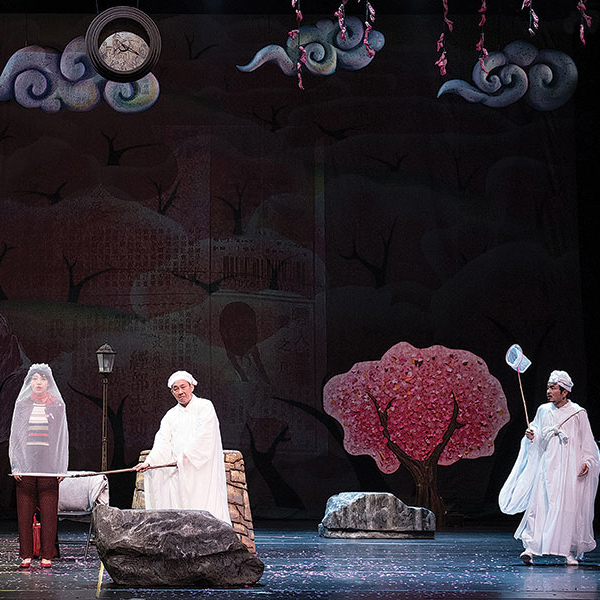 Stan Lai is the most celebrated Chinese language playwright and director in the world, touts the theatre program.

This complex theatre piece lies at the heart of why we have festivals. It is a dazzling work from another culture. It is a long-established and acclaimed piece of theatre which has shone through 30 years and arrives to the new audience of Adelaide still sparkling with ingenuity and artistry, even bearing with surtitles. It is one of those landmark theatre experiences which continue to thrill in the mind’s eye long after the troupe has left town.

The plot involves two theatre companies which have booked the same theatre on the same night. One company is presenting Secret Love, a very serious and heart-rending piece about a couple separated by the Chinese Revolution. The other company is presenting Peach Blossom Land, an outrageous piece of stylised Chinese comedy. The play opens with the couple reflecting on the changes in China and the beauty of destiny bringing them together. It is elegant, dignified, and slow, in the spirit of an old black-and-white movie, say perhaps An Affair to Remember. Once the audience is immersed, the other company arrives and the dispute begins about who is entitled to the theatre. Peach Blossom Land is a period piece complete with gongs, cymbals and lots of physical comedy. The contrast with the earlier piece could not be greater.

The hapless fisherman is dealing with a childless wife and a cunning boss’s ploys to cuckold him. Sheer, wonderful clowning abounds, particularly from Tang Tsung-sheng as Tao the fisherman. What a supreme performer. As the plays criss-cross, there are vivid and hilarious scenes, not the least of them the fishing boat on its long river journey. Finally, the fisherman finds Peach Blossom Land which is a send-up of all cornball-cliché lost paradise movies with falling peach petals and ghostly inhabitants gliding around in flowing veils of white while wielding white butterfly nets to guide home lost butterflies. Oh, so funny.

But the theatre managements are fighting and compromise is reached. The two plays must divide the stage. And so it comes to pass that our romantic hero is dying in a hospital bed pining for the woman he lost all those years ago while the fisherman cavorts among the peach blossoms. There is myriad other business going on throughout the production: issues of lost sets, and a set painter on set while the rehearsals plough on. There’s the buffoon roadie and the star-struck fan. Local references are peppered into the dialogue which give an added laugh and, come the end in the Taiwan hospital room, somehow the world stands still and the impeccability of the romantic denouement brings audience members unabashed to tears.

This is one of the world’s great theatre pieces performed by a cast of superb actors, and it has been our privilege to see it.

Oddly, there is one other character to review: Steve, the Door 2 Usher.

Audience enjoyment was threatened in an almost unprecedented way by the absurd number of late-comers who had to be guided to their seats in the dark requiring the usher to sprint softly and repeatedly up the stairs to gather them in batches.

When he was not doing this, he was forced to make endless interventions to the people who simply could not stop messaging or filming or gaming or whatever the hell they were doing with their beautiful big phones, so that other audience members were not distracted from stage and surtitle screens. This critic has never encountered such a stubbornly difficult audience, nor such a discreet and fleet-footed usher.