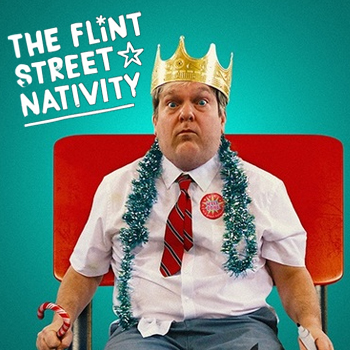 And now for something completely different from our acclaimed new theatre company, Red Phoenix. One minute it is delivering the incestuous passions of Caligula, the next the innate innocence of a primary school nativity play. But, there is one thing these extremes have in common - quality of production.

Flint Street is probably the silliest play one may ever see. Grownups of all ages and sizes embody children of six or seven. They ham it up and go over the top betwixt and between the commands of an invisible teacher. They are in nativity play costume and, just to really confuse the audience, the actors are identified only according to the nativity role and not the child’s given name. This is problematic because the roles are not consistent. But, it all works out in the end and it never really matters. One was too busy laughing.

Playwright Tim Firth, of Kinky Boots and Calendar Girls, dips perceptively into the crossovers between fantasy play and children’s imitation of the life around them. Some of the funniest moments in the play are of children mimicking the words and actions of their parents. These formative impressions clearly are moulding the children’s characters and attitudes at this early stage in their development and, while it is rib-achingly funny, it also is saddening and disturbing. Hence the very fine alchemy of this play; silliness at its most serious or vice versa, if you will.

There are lots of terribly-sung songs and plenty of effective technical shtick to embellish the narrative. It’s a sophisticated lack of sophistication as the kids jostle for roles and class status. The bully is a cruel manipulator, knowing just what buttons to press to humiliate and ostracise another child.

As the play evolves, the audience is led to understand the whys and wherefores of these nascent citizens.  If there is any doubt, it is rumbustiously clarified when the parents played by the actors who a moment ago were their children, turn up for the after-party.  It is still funny, but for some audience members, there may be a tear in the eye as they recognise that for all its absurdity, life is neither kind nor easy.

Gorgeous performances abound on this stage, which is brightly decked out as a school stage-cum-schoolroom-cum-playground. Brendon Cooney steals the show in stealing the nativity limelight, Brant Eustice shows vividly that for Asperger's clever kids, there can be no higher an incarnation than asses, Lyn Wilson is goody-two-shoes on a milo high, Tim Williams is gawky willingness, bandaid holding his specs together, trying to be the responsible one. What a love. Derek Crawford, the shepherd with the beer mat headdress, is a revelatory jewel in his fierceness while Sharon Malujlo is blissfully earthy. Nick Fagin, as the thruggling thweetheart, never confuses his athpirants. Anita Zamberlan Canala taps so very nicely into the ambivalences of good honest “wogdom” while one just wants to take that sweet vulnerable victim created by Cheryl Douglas and cotton wool her from the likes of Tracey Walker’s wicked spiteful bully character.

These fine actors have plumbed the depths of naiveté and come up with an eloquence of human development. Expertly, they have used the comic tools of clowning and mime and edged them gently with pathos.

Bravo one and all, for a desperately funny voyage into the essence of our humanity. Bravo Michael Eustice for bringing them together and creating this agonisingly funny night at the theatre.