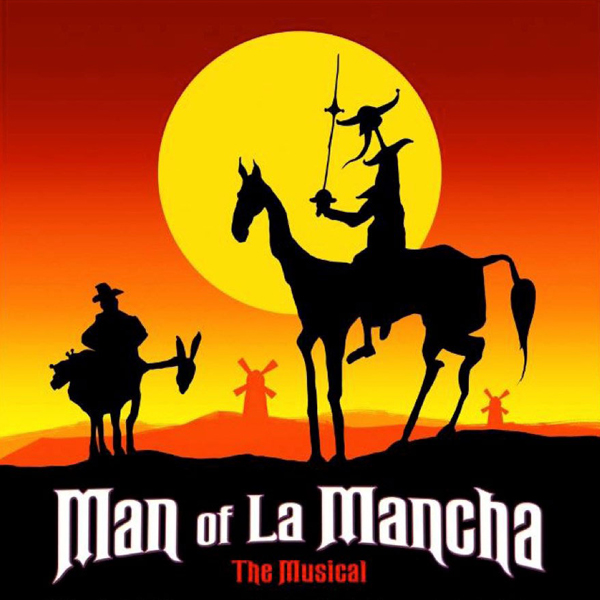 Few opportunities arise to see this musical, probably because it is a very tricky musical to produce.

St Jude’s has taken the bull by the horns, or at least the sword to the windmill, and turned on a very ambitious production indeed.

The set really is something to behold. That they can engineer such a strong two-storey structure on that little stage, not to mention a staircase lowered between the levels; fantastic. Musical director, living legend Pat Wilson, sits tucked away way up there with the keyboard. Who knows what else lurks in those dark and lofty rafters? The huge cast walks across the heights and beneath them and, mid-stage, over a very complicated tiered set-up. Then, to make the whole thing really grand-scale, the stage is expanded as well. Set designer Don Oakley has outdone himself.

Cast members come in and out of the auditorium doors and swarm effectively everywhere as they unfold the saga of Cervantes' dear demented Don Quixote chasing his delusions across the Spanish landscape, seeing nobility in rogues and beauty in squalor.

The ensemble is a wonderfully mixed bunch of actors and they work together as keen as a pack of puppies. Their energy and focus is impressive. They pull off a brilliant fight scene. Indeed, there are some spectacular and very effective group moments, not the least of them the terrible gang bang of the peasant girl, Aldonza, whom Don Quixote sees as the aristocratic Dulcinea. Billie Turner’s big voice and bright red lipstick bring this hapless soul to vivid life.

There are splendid effects such as the horse and the ass and a number of excellent cameo performances, particularly Tom Fraser as the padre and Tegan Muller as the belly-dancing gypsy girl.

The singing is up and down but it is an extremely earnest, workmanlike production from a wonderful community company directed by Max Rayner. See it, if you can.