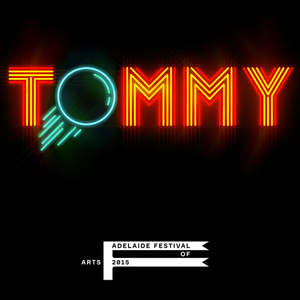 When Tommy was created, it was into sheer adoration and admiration as a seminal rock opera, borne of the late psychedelic-era.

It was a musical achievement which lifted Pete Townshend and The Who to an alternative iconic status in which they have remained, certainly in the minds of the Baby Boomers, if not in ensuing generations.

Thus it is a Boomer-powered audience who are packing out Her Majesty's to see this new incarnation of Tommy, an audacious re-working with a heavy jazz foundation.

Eric Mingus, jazz musician son of the jazz legend Charlie Mingus, laid claim to Tommy as a youth and reached out to Townshend who became his friend and also gave him carte blanche with the rock opera.

Now it is a jazz fusion opera - presented in concert mode.

Audience reactions to its Adelaide Festival World Premiere have been mixed. The unversed young say the story is impossible to understand. Some of the old decry the jazz as indulgent and intrusive. Certainly this critic was to find the riffing improvisational dissonances of the jazz overture an ironic companion to an opera which was famous for melody.

Herein Eric Mingus is the focal figure, bearded, rotund and possessed of a rich, sometimes piercing voice from which he favours Satchmo-esque rolling gutturals.

At first, despite the huge band onstage, it seems as if this may be his show as he shrills lamentations at the death of Captain Walker.

Then the characters appear and with them, the Mingus reworking of the rock opera songs.

Camille O'Sullivan is breathtaking in black, glitter cocktail dress, as the child mother, the sodden mother, and the fraught mother. Her voice is rock and jazz and blues; it is heart and passion; it is guts and glory; it is wide-ranging and simply sublime. She steals and saves the show from the moment she opens her mouth.

All the songs are arranged to a very different beat to that recalled from the original score.  The melodies are there, however, still arresting, still beautiful. They are slower. Sometimes their percussive bases seem almost calypso, sometimes they take the horse-riding tempo of the east, sometimes they wax folksy, sometimes a tad hard rock.

Other stars emerge. Harper Simon, so sweet of voice, delivers a truly chilling ‘Cousin Kevin’, the sadistic babysitting relly who, by accident, is to introduce that blind, deaf and dumb boy to the salvation of pinball.

Poor little Tommy had become blind, deaf, and dumb after witnessing his father murdering his step-father. The rock opera describes the sad state of his isolated world, the things that befell him and the suffering of his mother.

Gavin Friday plays the other bad guys - the Acid Queen and Uncle Ernie.  It's debatable as to whether the Acid Queen should be performed by a woman. Mingus has chosen otherwise as, indeed, he has for Tommy, who is performed by Yael Stone, very much a woman.

In a red feather boa with the song paced right back, Friday wins the audience over as a deeply ominous Acid Queen. He wins acclaim again as he sings ‘Fiddle About’, embodying the awful paedophile, Uncle Ernie.

To one's utter horror, there was laughter from a woman in the audience at this performance and this song. Inappropriate is just not the word.

Tommy was always outrageous to some but it never was a comedy.

Robert Forster plays Tommy's ineffectual father. He is beautifully cast and has a simpatico stage presence, as well as a good voice.

Accordion-player Elana Stone does backup vocals from the orchestra and in a solo, oh so beautifully. And then there is the other Stone as Tommy who finds her voice at the end of the work. Unfortunately, Mingus has her do a spot of rather feral jazz screeching before she is liberated to the lovely denouement song, ‘I'm Free’.

The new Tommy is most certainly defiantly different.

For Mingus, it is a vehicle for assorted jazz and self-expression. He even throws some Baptist Deep South preacher business into it.

But, with musical director Giancarlo Vulcano, he turns on one helluva multi-genre concert and, bless him, he keeps Tommy alive and well at the core of it.

There are some directorial weaknesses. There could be some more use of spotlights. The light is good but not exciting. Lead singers could come further downstage.

But, this old superannuated hippie just loved it.

Where: Her Majesty's Theatre