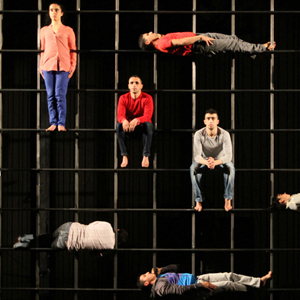 Some leapt to their feet in acclaim. Some sat and scratched their heads as the huge cast of ‘Azimut’ took its curtain call.

‘Azimut’ was the big Adelaide Festival of Arts 2015 opener. It was preceded by a ritzy everyone-who-is-anyone cocktail party in the Banquet Room and followed by the 9pm switching on of the Blink light display in Elder Park.

The timing was perfect. Indeed, as it happened, there was time to spare.

It is also a dark show - not in theme but in illumination.

From woe to go, the performers are shown in various degrees of half-light or darkness. The brightest moment is when they are back-lit in silhouette to climb up and down a massive grid. This is highly aesthetic and, like much of the show, somewhat meditative.

It is, after all, about a legendary Sufi teacher's quest to climb to heaven whence he realises that things may have been better back on earth.

The show opens with performers hidden in big bags which dangle over the stage. They seem to be cocoons and they rise and fall and move to atmospheric music. It is very slow and mesmeric. Eventually, they land and give forth life.

Darkness is a good mask for illusion and gives a strange and ghostly look to the tall, writhing people tower formed by the acrobats.

The show is not "acrobatic" in the sense that we usually expect in the vein of Shandong or Circus Oz. There is a scene of performers cartwheeling in turns, faster and faster across the stage. But athleticism is muted in favour of the sense of spiritual quest with wonderful ancient songs further evoking the mystical mood.

There are some very sweet moments of physical theatre. There is a very pregnant woman and then there is the birth, whence all the performers and hence symbolically, all of humanity, comes squeezing through her loins. This is presented as miraculous with a humorous bent. Conversely, there is also the giant bag into which, one way or another, all the performers must somehow fit. This is done with endearing whimsy. Of course, its suggestion is that we are all in this world together.

There are some lovely moments with billowing curtains and textural reveals. But, when a performer walks upside down on the ceiling, Adelaide goes ho-hum. It's a nice trick, but an old one.

There's a rattle of excitement when arrays of metal poles are revealed and shudder in response to thunderous sounds. This may refer to forces of war or nature - those things so big and scary, making man so small and vulnerable.

Thus is it in ‘Azimut’. From Tangiers via France, a show which is short, dark and esoteric.