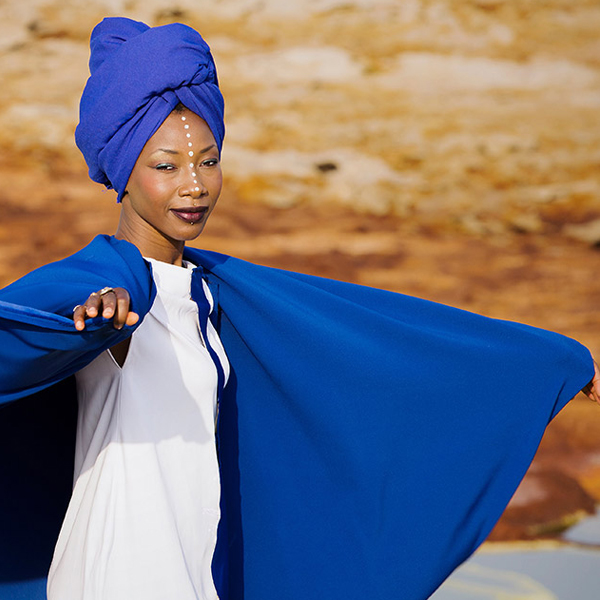 Malian singer songwriter Fatoumata Diawara will once again grace Australia’s shores when she takes the stage at WOMADelaide 2019 in Botanic Park. But it is not her first time in the country.

A working visit for a show in Sydney, Diawara didn’t make it to any other states, but loved what she saw. “I have a good memory of this trip, it was amazing!” she says.

WOMADelaide won’t be her first World Of Music And Dance gig either, having already performed for audiences at WOMAD Charlton Park, England.

The Mali born singer now lives in France. “I am based in Paris…” she explains, “But I have three houses actually, I’m a child of the world." And she is not wrong. Her touring schedule alone this year will take in several countries in Western Europe, as well as Australia, Canada, and the United States all in the first six months.

Diawara writes and sings in her native language, Bambará, which is the lingua franca of Mali and spoken by and estimated 80% of the Malinese population.

“I am lucky to have my traditional vocal” Diawara begins, “When I try to write a song or compose, this is like my ancestors who tell me how to speak this language” she says.

“But at the same time I have been in France for such a long time, since I was 18 or 19 years old… so I have [had] a chance to work with the piano and with many artists in jazz [and] pop, like Bobby Womack and Roberto Fonseca and [to] listen to different types of music... so I try to mix all those experiences into my music.”

Diawara’s songs have traditional roots, but the instrumentation is modern.

“Musically you will realise that I don’t have a traditional instrument in my band” she says.

Representing her African roots and representing as a woman are also driving forces.

“I like to represent the African language because [it is] so beautiful, the continents are very beautiful and [it] can heal people too” she says. “It’s [also] important to keep the African woman on stage. There are only a few woman being representatives of African female artists - being an African ‘mamma’ - like Miriam Makeba, Angélique Kidjo, [and] Oumou Sangaré, they are getting older now and we need to follow them, we need a new generation to work hard like them doing the true music.”

Diawara is all about sharing and collaboration, about bringing herself to the writing process, and about mixing that with modern elements and energy.

“I’m lucky that I come from Mali where the base of our music is the Blues” she explains, “Blues music can be added to any type of music; Jazz, Rock, Pop, Funk… it is really easy for Malian people to have a real mix.”

Her African heroes stand as examples for her musical trajectory. She works hard to adapt her music to the moment, but it is all underpinned by a desire to follow those “African mammas”.

“It is necessary to have a representative of African woman on stage” she says. “In the same time I am representing all women, because my audience is very diverse. It’s important.”

Diawara will be alongside one such hero in the Artist in Conversation session at WOMADelaide on the 9th of March. She will be joined by Angélique Kidjo.

“She’s [like] my mum, I love this woman, she’s so charming” Diawara gushes.

“When sometimes I am very tired I look at her, and Nina Simone and I say ‘OK, don’t give up baby! You didn’t even start yet!’ Compared to her I say ‘OK, c’mon, wake up and go to work, you cannot say that you are tired.’

She’s still strong. She’s amazing. She’s incredible. She’s my energy, my example, the best example in the world! She is doing it still you know, she is very strong. I love this woman!”

Diawara’s social activism and campaigns against the trafficking and sale of black migrants in Libyan slave markets has also put her in the spotlight. Her song Djonya literally translates to ‘slavery’ in Bambará

“A Couple of years ago we had a big problem with this in the North of Africa,” Diawara begins,

“And times up! For me it should not happen. You must be stupid… to think you are more important than somebody else. I was angry. I went to my studio and I wrote the song, and did the video in two days. It’s important for me. It was a message to say I am the next African mamma, and I need to talk to the next African generation, to say you are not stupid, you are all on social media, and this is my message. Focus your mind on something else, time is up for slavery, lets fight for something else, it’s stupid, that’s it!”

Her passion and her frustration are evident, and she has made it her mission to carry that torch.

“As a woman and as an African mamma it’s the way it should be, I have to take my place, I have to be the voice, they know that I love them, it’s all about love.”

Fatoumata Diawara will perform at the WOMADelaide Festival in Botanic park on Friday the 8th and Sunday the 10th, as well as speaking at Artist in Conversation on the Saturday.