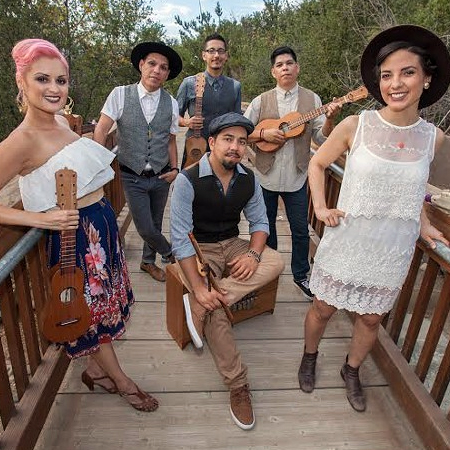 It’s funny the way things happen. Lives as travelling musicians were never a future envisaged by the members of Las Cafeteras. It all began with happenstance: social conscience and a commonality as the children of migrant parents.

Las Cafeteras is a musical group of Mexican Americans who became friends as students in Los Angeles. As the all-singing, dancing, and multi instrument-playing Denise Carlos tells it, they met when they were learning Son Jarocho music. This is described as a musical style which unites Mexico and the USA and which emerged from Veracruz. It has a particular vitality and a very special cultural significance for America’s Mexican community.

But Las Cafeteras has taken it further. This lively group has evolved into what is described as a “genre-bending” ensemble, incorporating Afro-American sounds, “a mishmash of punk, hip-hop, beat music, cumbia, and rock.”

Of course, it is perfect material for WOMADelaide, especially considering that it has a strong socio-political bent in a time when America has been in administrative lockdown precisely because of its relationship with Mexican immigrants.

Carlos, one of the founding members of the group, is emphatic that while the group is acknowledged as political, its political message is carried via a universality of music, music being the great common denominator, the great communicator.

For some, she admits, things feel politically tough now in the USA.

While the Las Cafeteras members were all born in the USA and have the advantage of sophisticated educations (Carlos has a Masters degree in clinical social work), it is their immigrant parents to whom she looks and, in particular, her father.

“He says that things have not really changed since the 70s when he came to the US, He says it’s been tough. It will continue to be tough. But we can’t throw in the towel.”

There has been a background for many immigrants of "finding yourself living in a country where you are not welcome". Thus many migrant parents, her own included, have been part of a generation, she says, which "stayed quiet to be safe”.

Carlos speaks rapidly and passionately. These are issues which have underscored her life and also the lives of the other members of Las Cafeteras. In the Carlos way of thinking, the struggle goes on but with it comes strength and joy in the communities. While the president is pouting about his wall and discriminating against immigrants, the Mexicans of Las Cafeteras' ilk are reflecting not on the inequalities of immigrant life but on the power and beauty of immigrant community.

Mexicans are not alone.  “Identity matters, experience matters, that’s the message; not that the leader is not good enough,” says Carlos.

She also is a dancer, an exponent of zapateado and member of the Ballet Folklorico de Los Angeles, albeit she is just recovering from foot surgery. She expects to be healed well enough to go on with the joyful foot stomping of Las Cafeteras' music when they hit WOMADelaide.

The group tells stories of America’s migrant children and their exuberant music, infused with Afro-Mexican sounds, is an eclectic mix from assorted folkloric traditions, mainly sung in Spanish.

“We sing in Spanish but we talk to each other in English,” says Carlos.

One of the advantages of migrant children is that they are bilingual and they have two sets of culture and tradition.

Then again, Carlos also plays the glockenspiel, a very non-Mexican instrument. She took it up because she wanted to hear a sweet "twinkling of the stars" sound in some of the group’s music. They tried the triangle but it was not right.

“Then my roommate who is a teacher had all these toys and among them was a glockenspiel; and there it was, the only thing that made the sound.”

A donkey jaw bone is also among the instruments of Las Cafeteras. Ironically, it is usually played by Leah Rose Gallepos who is a vegan and is always at pains to explain that it is a traditional instrument and no donkey was killed for their music.

In fact, says Carlos, one of the interesting sound elements of the donkey jaw is the rattling of its teeth.  But Leah will not be coming on the trip to Australia.  "She has just had a baby and her husband is doing a PhD so she will be staying home", explains Carlos.

Las Cafeteras is now about a decade old and it has become its own family.

“Like every family, we agree and agree to disagree,” laughs Carlos.

But, as a group, as native and migrant children born in America, they have also the power of America’s First Amendment: freedom of speech.

“We are saying what we want to say.”

In a joy of lively rhythms and voices, we shall hear it onstage at WOMADelaide on Friday at 7pm on the Novatech Stage and on Sunday at 2pm on Stage 2.

Just for cultural good measure, on Saturday at 6pm in the Taste-The-World tent they’ll do a Mexican cooking demonstration.

Follow this link for a teaser of their music