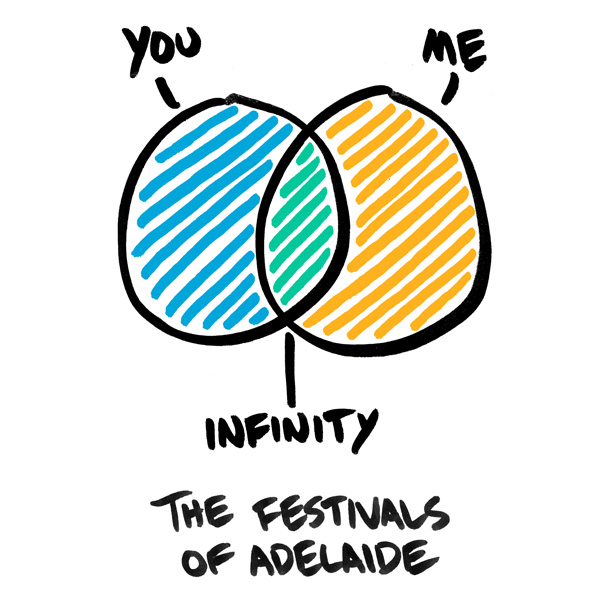 With eleven wildly successful festivals ratcheting up records for the state economy, Adelaide has taken its beautiful festival balloon and pushed it skywards and into the international future with a university course in Festivals Management.

This is another brilliant Adelaide arts initiative which thrusts the state into the pioneer limelight again.

One is cheekily tempted to start putting down bets as to when the frenzy of interstate emulation may begin.

Adelaide always has led the way with arts administrators. They have been a proud, albeit unofficial state export for generations.

Now, via today’s revelations from Festivals Adelaide CEO Christie Anthoney, we are formalising the qualifications and creating an exciting broad-church, artistic directors' and festival managers' springboard straight out of UniSA.

Students may major in Festivals Management as they do their Bachelors of Creative Industries degrees.

The doyens of the eleven festivals will be teaching their skills to the upcoming generations, reveals Anthoney.

WOMADelaide’s legendary Ian Scobie will lecture on budgets, for instance, and the Fringe’s ever colourful Heather Croall will teach her ways of successful growth and the joys of digital platforms.

Others of our eleven festivals include SALA, Adelaide Film Festival, Feast Festival, Oz Asia, the Guitar Festival, the Cabaret Festival, and of course, the Adelaide Festival itself.

As Festival Management students contour their courses, they will be able to add their own specialist elements, from philosophy and fashion to tourism and art.

Anthoney says they have been studying the various specialties and expertises of festival management people and finding their qualifications highly diverse.

While she admits that one of her favourite things is a spreadsheet, she would like, if faced with the choices, to add philosophy and psychology to her academic palette for such a course.  "This is just the beginning of the syllabus,” she says. "It will continue to evolve through the rest of this year.”

Interestingly, as Anthoney points out, there is already a Festivals expert on the staff at UniSA. He is Adrian Franklin formerly of Tasmania’s renowned MOFO festivals and his expertise includes an understanding of the historical question of why people have always come together to celebrate.

This is a phenomenon Anthoney herself finds heart-warming, fascinating, and profoundly significant.

Arts festivals have been a substantial source of serious employment in SA.  The 2018 economic impact study showed the gross economic expenditure rose by 29.2pc to $345.9 million and a wonderful 1045 full time equivalent jobs added in that year.

But Anthoney readily admits that the arts which breathes so much financial vigour into SA is a truly ephemeral and mysterious thing. There is much to learn and understand about its extraordinary human chemistry.

Anthoney sees the wisdom of academia and experience as a possible way to “put a light” on it all.

Of course, she adds, a university qualification will not be the only way to open the door into festivals. Volunteering has been a solid path into the industry and it will remain so.

Indeed, Festivals Adelaide has been researching our “really resourced, cultured army” of about 3000 festivals volunteers.

It is a solid, devoted squad which has come to be used by all the festivals. Where once it was largely over 60s demographics, it has been expanding. It is a significant resource with its own strong potential.

But Adelaide Festivals has been working widely within the arts support community, and, with the support of the Office of the Ageing, there has been considerable research into how the powerful and dollar-rich older demographic interacts with diverse festivals. To that end, says Anthoney, various changes quietly have been underway, among them such things as increased watering stations and bag drops at WOMAD.

Both the Festival and the Fringe recorded record growth for 2019 before figures even emerged from the other festivals. The children’s Dream Big festival, formerly and famously known as Come Out, finished only recently with bumper sell-out seasons which some critics protested really needed to be longer to allow more audiences to attend. The History Festival was massive and now the city’s winter arts celebration, the Cabaret Festival, is at its height and packing out its diverse venues spread around the Festival Centre. Artistic director Julia Zemiro can only bask in its sequential triumphs, many reviewed here on this website. Our critics have noted an exciting, daring surreal edge to her program.

In a new study on behalf of Economic Research Consultants, Professor Barry Burgan has revealed that in 2018 alone the combined economic impact of our 11 festivals has lavished the city with no less than $109.1 million of “new money”. That is a 27.7pc increase on 2017.

It is an extremely good news story,

So thoroughly have the arts been rocking the pockets of the city burghers that Festivals Adelaide have celebrated by commissioning our distinguished and amazingly appropriately named artist, Peter Drew, with a commission to express our relationship to our festivals in new artwork. It soon shall be seen in the city and online.