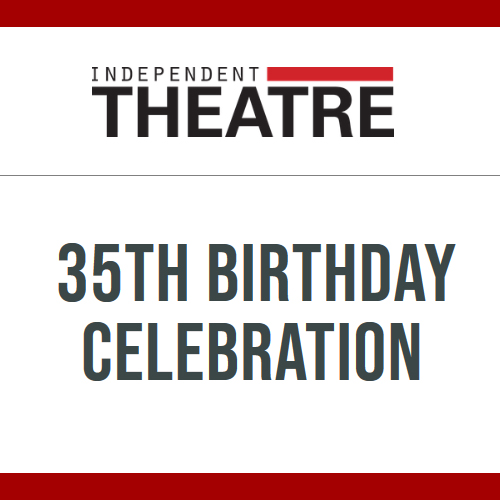 With the alarming flight of time, suddenly a big birthday has come around for the Independent Theatre Company.

Rob Croser and David Roach have been bringing the most elite level of theatre arts to this state for this seemingly epic time. Not bad, for something these theatre powers have been doing on the side while holding down serious full-time careers.

Croser is an award-w

But their love of good theatre, their affinity with the beauty of the written and spoken word, and their perception of the need for a brave new outsider company on the theatrical scene of Adelaide brought them together with Allen Munn and Pattie Atherton to establish their own Independent company.

Across the years, through various venues, it has survived and thrived, bringing daring new works to Adelaide audiences. It has been swathed with awards.

Now, suddenly, it is 35 years old and, dammit, it is going to throw a party to celebrate its massive history of classic plays, new plays, and plays by overseas writers.

On Sunday 24th March at its new home base, Goodwood Theatre, its assorted casts and supporters will perform scenes from favourite plays. They will tell stories of the company, play music, and exhibit pictures of past productions, a mind-boggling 200 of them.

And it will reflect on some of the company’s laurels. It was the first non-professional company to have been invited to perform in The Space Theatre and thereafter, for a decade, be a regular company in the Festival Centre’s theatres.

It struck another first in incorporating members of the Indian and African communities into productions. It was the first company in the land to cast an African actor as Othello. That actor, Shedrick Yarkpai from Liberia, went on to play assorted blind casting parts in a lot of classic and contemporary western theatre with the company and even became subject of a play about his journey to South Australia as a refugee.

Independent Theatre has had the strongest link to American theatre and culture of any company in SA and the American playwright John Logan has regularly given the company rights to first productions of his works, outside New York or London.

Then there are the Rob Croser adaptations. This skilled master of the theatre has adapted some of the hardest classics of literature, from Steinbeck’s East of Eden to Huckleberry Finn and The Magnificent Ambersons.

Among the company’s wealth of Australian premiere productions and introductions to Australia of overseas writers and new works have been:

- Frank Galati’s Steppenwolf adaptation and production of The Grapes of Wrath in 1992 and 1995;

- Adelaide, but London based, playwright, Samuel Adamson’s adaptation of All about My Mother (2011);

And Independent Theatre is not finished here. It is simply pausing to have a birthday party celebrating its mass of achievements.

Tickets at $25 are still available to the party on Sunday March 24 at 3pm in the Goodwood Institute.