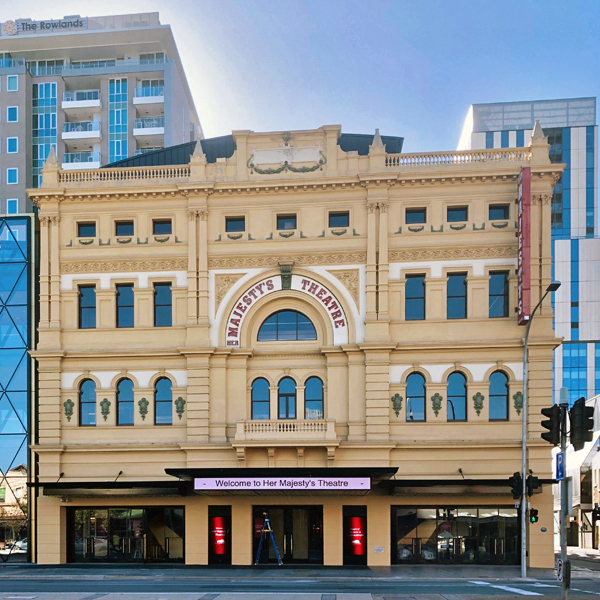 Her Majesty’s Theatre, Adelaide’s new triumph of the arts, has been one of the great victims of the pandemic.

Its gala opening concert is on indefinite hold.

Years of fundraising and an extraordinary execution of design and construction end with a few privileged media reveals and more waiting.

As a scribe for this fine online arts website as well as resident critic of the ABC’s Sunday Smart Arts program, I scored alongside Peter Goers, an invitation from Festival Centre CEO, Douglas Gautier, to be among those first people to have a private tour of the new theatre.

No, it is not a “revamp” as people keep saying. This is $66m of completely new state-of-the-art theatre. All that remains of the old Her Maj is the gracious Grote Street facade and the Pitt Street wall. Even the stage door has moved down Pitt Street, as I discovered when I went to meet our guide.

What lies within is a whizz-bang contemporary wonderland, a modern theatre which will be the envy of the world.

Of course, theatre history sings its way into the 2020 entity.  Her Maj was once called The Tivoli, The Prince of Wales, The Opera Theatre…

Hence, the first thing one encounters once through the Stage Door, is a magnificent Signature Wall. On the bricks lovingly rescued from the demolition are the autographs of performers who graced the stage of the old theatre. It is a thrill of beautifully-salvaged nostalgia, a century of memories with bricks aplenty for the future stars to sign their names as the years roll on.

The new stage is breathtaking. It is a massive expanse, much bigger than the old one.

Technicians working on all the new facilities have been responding with enthusiasm. Excellent, they say.

And there, as one stands above the orchestra pit, the splendour of the auditorium is revealed, a sea of svelte red seats. Above the stalls, a dress circle and grand circle arc elegantly. We used to call the upper circle “the gods” because one is close to heaven when one is in them, so perilously high do they feel. Of course, they are also what’s known as "the cheap seats” and many of us in our frugal student days had our nascent J.C. Williamson's experiences up there. We wax lyrical with nostalgia.

I had felt somewhat concerned when I heard that there would be no centre aisle in the stalls of the new theatre. I like a centre aisle. As a professional audience member, I am well known for highly defined preferences and ease of egress is at the top of the list. “A quick exit is a good exit,” say I.

My reservations evaporate the moment I walk through the auditorium. The gentle curve of front stalls not only has leg room even for tall people but also room to walk in front of said tall people. No standing up to let people pass. Oh, it is so generous and civilized.

Not only but also, every seat has a handsome circular plate beneath it. These are air vents which enable the air conditioning to circulate freely, for each and every audience member to have their own source of air. This is my idea of bliss. No foetid old-school people-soup air for this grand new venue. The best technology has been employed. It is state-of-the-art.

There are two good, broad aisles at the back area of the stalls and, I realise with joy as I try sitting at different vantage points, there is not a bad seat in the house. The sight-lines are superb.

Even the handrails along the auditorium walls are gorgeous. There is a lot of wood in this theatre, magnificently crafted and designed. Wherever one looks, there are thoughtful details. Some are reiterations of old Edwardian theatre designs and some are subtly innovative. There’s a period pressed-tin ceiling, for instance.
There are also lifts, because no matter how handsome the stairs may be, it is still a long climb up there to the gods.

There are bars and foyers with luscious red banquettes on all the floors. There are brass celebrity tiles embedded in the floors, again recalling those who have been part of the theatre’s history.

And way up at the very top of the building, the only part as yet unfinished, is the gallery and formal home space planned for the state’s Performing Arts Collection and special exhibitions.

Douglas leads us into a perilous no-man’s land, the high eyries of the lighting and flying technology.
“Hope you’re not scared of heights,” he says. I fake nonchalance. It is scary up there.

Of course the performers also score very nice new digs. Backstage on two floors are snappy new dressing rooms; big for the chorus and small for the principals. The piece de resistance backstage is the most utterly superb rehearsal room. It is a vast space with mirrored walls, a barre for dancers and a sleek polished-wood sprung floor.
“This meets the size requirements of the biggest Disney-style touring shows,” says Douglas. And maybe acts as its own separate performance space? “Indeed,” says Douglas. One begins to imagine cabaret festival shows therein.

The main foyer is now at the western side of the theatre.
The neighbouring Grote street building was purchased for this purpose.
It is now new, tall, glass-fronted and geometrically handsome. Sophisticated bars, tall drinks tables, and fancy seating features are on the different floors. The higher the floor, the better are the city views out over the old market. One can imagine standing with a glass of champagne, looking out across the night lights.

And, that is what we are waiting for - the nights of champagne, of laughter and applause.
They will come.
When they do, Her Maj will be able to welcome 1500 of us at a time.

For the moment there has been just one little “soft opening” with a Slingsby youth production; small audience and social distancing. More small shows are on the cards. But, come hell or high water there will be a big show and then another and then another. It is just a matter of time.

And we can’t wait!