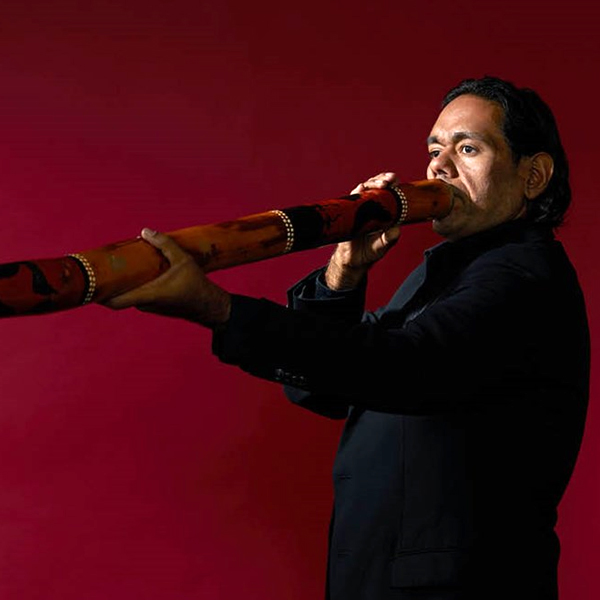 The Chineke! Orchestra was founded in 2015 in the UK by double bass player Chi-chi Nwanoku OBE to provide career opportunities for young Black and ethnically diverse musicians in the UK, Europe and elsewhere. What a profound and major advance for Reconciliation it would be if something similar was established in Australia, noting that this evening’s program features a world première performance of The Rising of the Mother Country by composer, singer and leading didgeridoo player William Barton.

Chineke!’s mission is to champion change and to celebrate diversity in classical music, and this evening’s concert delivered on that promise in spades. The full orchestra has not travelled to Australia for the Festival, but rather a smaller ensemble of ten musicians, featuring the orchestra’s strings, woodwind, horn, and piano principal players. There is just one of each featured instrument, and so the configuration is ripe for significant chamber works.

The ensemble arranges itself in a semicircle with Chi-chi Nwanoku standing centrally upstage. The ensemble’s diversity is apparent, right down to their attire. Absent is strict conventional suiting and long dresses. Rather there is a more relaxed feel that is underlined with the occasional item of ‘national dress. There is however nothing ‘cosy’ about the quality of the music making – it is tight and terrific, with controlled passion tempered with evident joy – and Nwanoku keeps a lid on it with watchful direction to which the ensemble respects and responds.

Nwanoku’s programming choices include Bohuslav Martinů’s Nonet No. 2, Sergei Prokofiev’s Quintet in G minor, Op.39, Valerie Coleman’s Red Clay and Mississippi Delta, Samuel Coleridge-Taylor’s Nonet in F minor, Op.2, and of course Barton’s The Rising of the Mother Country, which was the clear highlight of the program.

The Martinů Nonet was composed in 1959 and is eclectic in style, with pleasing melodies and jaunty rhythms. It is a satisfying composition and the Chineke! easily draw out its fun and vibrance. The Prokofiev quintet was originally commissioned by a ballet troupe, but proved too difficult for them, and it eventually became ‘pure music’. Not unlike the Martinů, it includes jagged harmonies and rhythms at which the Chineke! clearly excel, and enjoy. Coleman is a living composer, and her Red Clay and Mississippi Delta is jazz infused. The audience willingly join in with rhythmic finger clicking when invited to do so by the ensemble, but soon give over to an appreciation of Meera Maharaj’s excellent work on flute. Coleridge-Taylor’s Nonet is ‘big sounding’ and, like the Martinů, is eclectic in style with fine examples of tonal lyricism.

But Barton’s composition stole the show. It is an expansive piece that traverses mystery, deep introspection, wonderment, joy and even frivolity. It begins with almost ominous rumblings from Nwanoku’s expertly played double bass under which Barton’s pleasing vibrato-free tenor voice emerges and bathes us in clean vocal tones. This gives way to simple but affecting melodies from the strings and horn, and the piano provides a robust accompaniment to hold it together. And of course Barton performs on his didgeridoo and ominous-sounding clapsticks, and he coaxes the most remarkable collection of sounds and effects from the ancient instruments. The appealing juxtaposition against the instruments of the ensemble produces a remarkable soundscape that allows one to become lost in the moment and at one with something else that is quite enigmatic. In the programme notes, Barton says The Rising of Mother Country represents the power of our shared histories that are a part of healing, strength, and determination. And couldn’t our fractured world do with some of that?

This was a truly remarkable and deeply satisfying concert. It was a triumph of programming by the Adelaide Festival.