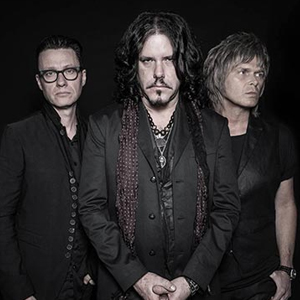 Who ever knew having a Tea Party as an adult could be so much fun… as long as it involves Canada’s finest trio of musicians, of course! The air was thick with anticipation at the seated show at Thebbie, both for the main act (of course), but also for the support act; just like the real Jesus, Adelaide band the SuperJesus is back from the dead, and interestingly they still belt out their sound as though they never left the stage! And they still look the same too, though that could be because I too have aged since last seeing them back at the Uni Bar! They played all their old hits, ending inevitably with the biggie ‘Down Again’, and they got a deserving standing ovation.

Of course, we were all here for The Tea Party, and it wasn’t long ‘til the party began; with a Theremin up on stage, I knew this would be a killer show!

Tribal sounds emanated from the darkened stage with the scent of incense burning and anticipation building. The band came entered to a roaring crowd and opened with the sensational new tune ‘The LOC’, a killer Zeppelin-esque track with an awesome riff, which also opens the band’s new album ‘The Ocean At The End’. Definitely a fine way to kick things off! Next up was classic ‘The Bazaar’, and after a few notes of the distinctive eastern-influenced main riff, the entire audience was on their feet!

‘The Black Sea’, another new track from ‘The Ocean At The End’, followed and front man Jeff Martin got the crowd to sing along – the first of many moments of crowd participation! Always a band to provide balance between light and shade, the mood was taken down to a melancholic level with ‘Psychopomp’, before coming back up for ‘Fire In The Head’. As usual, Jeff was pretty chatty in between tunes, adding to the intimate atmosphere and making the experience rather personal.

Things got dark next with the not-so-settling ‘Lullaby’, fat with its chunky metallic riff and uneasy bass line the Theremin even featured in all its dissonant glory!

To lighten the mood, Jeff broke out his 12-string acoustic for another newie, ‘Water’s On Fire’, where the crowd happily sung along as the band seamlessly segued into an interlude from ‘Release’. Jeff showed off his sitar prowess, breaking out the instrument for a fantastic extended intro to the killer ‘Save Me’, where crowd participation reached climatic levels. They blended the tune with the band’s cover of ‘The Maker’, which also features on the new album, before Jeff invoked the spirit of Jimmy Page with a strings bow on his Les Paul, before returning triumphantly to ‘Save Me’ for a massive finish. The new album’s title track, ‘The Ocean At The End’ was up next, before the main set came to a close with a massive belting of ‘Temptation’.

Of course, after such a massive finish, there was no way the crowd would let things end there and Jeff soon returned to stage, solo with his slide guitar at first before being rejoined by the band for the bluesy romp ‘Turn The Lamp Down Low’, which bled seamlessly into new blues tune ‘The Cass Corridor’. The 12-string surfaced again for the awesome instrumental ‘Winter Solstice’, which led perfectly into the set closer, and my favourite Tea Party tune, ‘Sister Awake’. And what a way to end, with hurdy gurdy, djembes, darbukas, and massive guitars, the entire crowd was brought to their feet for a truly massive finish. What a night! The Tea Party are back, and looks like they’re here to stay!