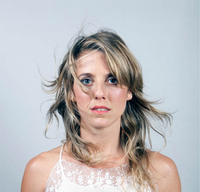 Written and Directed by Chenoeh Miller. The Street Theatre - 3 Nov

It was a good thing I was hankering for some theatre to rock my world when I went to see CORDELIA, because this is exactly what was dished up.

A prequel to Shakespeare’s King Lear, this production takes us back to the childhood of this infamous figure’s youngest daughter and the love they shared before her disinheritance. Born into tragedy and bitterness, Cordelia’s (Noa Rotem) story is one of survival amongst the oppressive conditions of her toxic familial home.

After the sudden death of his pregnant wife, the formerly cold and distant King warms to the surviving infant Cordelia and favours her with his love and affection. This further alienates his neglected eldest daughter Goneril (Erica Field), already ruthlessly ambitious and hell-bent on vengeance, and she bullies Cordelia relentlessly.

Cordelia finds some solace in her kinder other sister, Regan  (Peta Ward), but their relationship is fragmented when the Duke of Cornwall (Rowan Davie) wreaks devastating havoc on the family and Regan is blamed and married off to Cornwall as punishment.

Narrated by Cordelia’s future father in law, the King of France (Hadley), this production doesn’t actually feature a King Lear in the flesh. When director Chenoeh Miller found out the actor cast to play King Lear (Joe Woodward) was unavailable to do the show, she couldn’t envision anyone else doing the part. So, no one else was cast in the role and instead, the King’s presence became implied or was voiced through Hadley.

This production was a long-time in the making, and the emotional and artistic investment each performer has put in to CORDELIA is clearly apparent. Noa Rotem exquisitely embodies the strength and serenity of Cordelia, with her final scene so powerfully transcendent I almost lost my sh*t. Erica Field plays the tyrant with equal authenticity, channelling the white rage of the haunted Goneril fearlessly.

Ward and Hadley offer some adorable comic reprieve through their more jovial roles, while Rowan Davies delivers an intriguingly abstract performance that is quite simply fascinating. Janine Watson as the ghost of The Queen is a gently antagonistic presence and she skilfully avoids distracting the audience from the living while still making her imprint on each scene.

Interestingly, four out of the six cast members have done previous work with Zen Zen Zo Physical Theatre. Having seen a Zen Zen Zo production during the Adelaide Fringe Festival in 2010, its trademark absurdist flavour of interpretive dance was undoubtedly evident throughout CORDELIA, but delivered in a more accessible manner.

Together with Imogen Keen’s sumptuous costuming, the moody gothic lighting and the grand simplicity of the set, CORDELIA provides rich fodder for the senses. It’s highly original theatre that highjacks your imagination and offers you the rare opportunity to lose yourself in the moment.