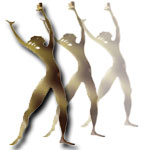 The Adelaide Critics Circle has announced the shortlist for its 2013 annual awards. Shortlisted from a field of more than fifty nominees for awards in the performing arts are:

In recognition of the importance of amateur theatre in the community, the Adelaide Critics Circle continues its long-standing support of unpaid workers in the performing arts with the Awards for Amateur Theatre. Shortlisted in 2013 are:

The Award for Visual Arts will also be announced. There are no finalists, with a single winner, decided by the Visual Arts critics.

Finally, the ceremony will also see the announcement of the coveted Lifetime Achievement Award. The identity of the recipient is a closely guarded secret - revealed only on the night.

The 2013 Awards Ceremony, which is a free event, open to the public, will be held at the AC Arts, 39 Light Square, Adelaide, on Monday 2 December at 6 pm.

The ACColades, now in their 16th year, are the annual awards of the Adelaide Critics Circle, a group of 25 Adelaide-based critics, writing for the mainstream and alternative print and electronic media.