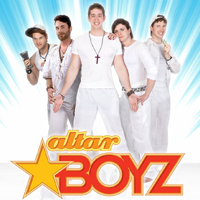 I didn’t witness the nativity of Altar Boyz during the Fringe, but I heard it couldn’t be heard very well due to technical difficulties.  This was not a concern in this resurrection.  You are coming in loud and clear boys!  David Gauci’s production of this 9th longest running ever, late-naughties, Broadway hit is a nuclear-fueled send up of a whole host of things including the manufactured pop band and their myths, crass commercialism, and happy clappy white American-style fundamentalism - and where would that be without a big dose of hypocrisy.

The format is a bit like a morning kids’ show full of short segments and activities of an unchallenging intellectual nature – not to say that the BIG issues, like queers coming out of their Catholic closets, isn’t covered.

Gauci, a two-legged tour de force himself, put his actors through penance to provide you with non-stop entertainment.  Ringleader Matthew, played by Brady Lloyd, had an overly self-confident smugness that never failed to make me want to throw up (and I mean that in the most complimentary way).  David Salter, who I believe is the only cast member not in the original Fringe production, gave a thoroughly charming and deliciously nuanced Latinised characterization; his was the Juan that I loved.  Brody Thomas-Green provided a show-stopping song on top his pink portrayal of a person of doctrinally unacceptable sexual persuasion.  Gareth Wilkes reminded of my farmer cousin working the potash mines in Saskatchewan – spot on and a bit spooky – while Lindsay Prodea played a remarkably authentic Hebrew with a voice as clear as a bell.

Choreography by Shenayde Wilkinson-Sarti had the boyz sweating in mind-numbing routines with some very athletic feature work by Lloyd.  Musical director Emma Knights had the band of three operating tighter than a nun’s proverbial.

It’s not a long show so you’ll get a good night’s sleep before mass the next day.  A great script, pop tunes, amazingly detailed characterisations, and perpetual motion in a show that pokes fun at itself.  Go see it this final weekend for God’s sake.

When: 23 Oct to 2 Nov
Where: Star Theatres
Bookings: trybooking.com