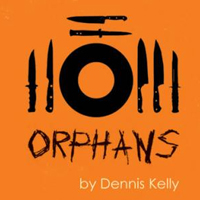 "Two hours without an interval", the audience is bladder-warned before entering The Bakehouse for "Orphans". It sounds long. But, if "Orphans" is long, it is only by about ten minutes of overwriting. The production whizzes along like a rocket, its content so taut and worrying that the time flies. An interval would break the tension.

The play, by English playwright Dennis Kelly, describes a brother and sister whose neuroses and general dysfunctionality is borne of some form of institutionalised childhood. We learn that their parents died by fire and that the sister, Helen, had always protected her troubled young brother, Liam, thus missing out on possibly happy adoptive families.

Liam, she says, is just "unlucky".  Liam is, in fact, deeply psychotic - a condition expertly articulated by Sam Calleja from the moment he bursts onto the stage covered in blood and enquiring if the Basmati rice on the table has been cooked with lemon. Calleja sustains the sweet and sour of this psychopathology beautifully and the audience feels both compassion for and fear of him.

As his sister, Anna Cheney, has the trickiest of the scripts to deliver. Playwright Kelly points out the way in which life so often is expressed in unfinished sentences by having Helen speak almost entirely in snatches, fragments and reiterations. Cheney snaps it all out in a crisp, clear voice which underscores the idiosyncrasy. Helen, ostensibly, is the controlling character of the play. Her partner, Danny, is doting and entirely subjugated. He is embodied by Charles Mayer in a performance of absolute skill and artful nuance. Mayer is an outstanding actor and his voice is sublime.

All three cast members are powerful and so is the mood generated by director Shona Benson who also designed the very smart set. It is a raised platform floor presenting a proud, Ikea-chic interior but, outside and below is a shambles of broken rocks and furniture suggesting a degraded and slum-violent environment.

The soundscape veers from manic to clamorous to eerie as it facilitates time changes.  There's a bit of stagey artifice in these transitions. The play's action takes place over just one fraught night. Its location has been changed from the UK to Adelaide, the rationale being that the phenomena of violence, racism and recidivism are common to Western culture.

This presentation by Bluefruit Theatre is the sort of thing for which The Bakehouse is beloved. It is riveting, confronting drama with top notch production qualities.

When: 9 to 23 Nov
Where: The Bakehouse Theatre
Bookings: bakehousetheatre.com