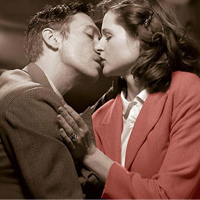 Kneehigh Theatre with The State Theatre Company of SA. The Dunstan Playhouse. 20 Sep 2013

When audiences ponder what the theatrical experience ought to be like, it is the stuff of Kneehigh's production of Brief Encounter they imagine.  Start with a poignant, nostalgic and romantic script.  Noel Coward wrote sweetly of an ordinary middle class woman, in a stale marriage with kids, who meets a man of similar circumstance by chance.  He is a dream - handsome, a doctor, a gentleman, totally genuine and madly in love with her.  Coward focuses on her dilemma as we see her grappling with responsibility, social norm and a little bit of cowardice.

Kneehigh invigorates the 1936 play and the 1945 movie version with heaps of theatrical magic.  Our sometimes furtive couple gleefully meet and sadly part to the tune of train whistles.  The train station and its refreshment area is a beehive of activity including a couple of secondary love stories, fellow travellers, teas and cakes.  The characters are richly developed and comically absurd and eccentric.  Everybody and everything is a metaphor if you think deeply enough about it.

Adaptor and director Emma Rice makes fabulous use of mixed media and Kneehigh's multi-talented cast. The audience is treated to a few pre-show musical numbers by train conductors.  Our heroine literally walks into a movie of her home life.  The kids are expertly handled puppets.  A passing train through the rickety station is signified by vibrating tableware.  The trains themselves appeared once as a toy choo-choo and again in such a noisy life-size version I nearly jumped out of my seat.  People do indeed fly with elated emotion, and music, from Rachmaninov's Piano Concerto No. 2 to naughty little Vaudeville ditties, enhance the emotional quotient.

This is a night of theatre sadly too rarely experienced. Bravo!

When: 10 to 28 Sep
Where: Dunstan Playhouse
Bookings: bass.net.au