Stories Then and Now – OzAsia 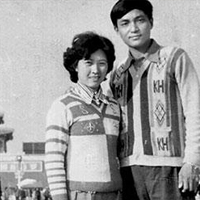 Yet another OzAsia  show ticks all the boxes - culturally significant, revelatory, brave, entertaining.
Stories Then and Now would be ground-breaking, if the renown William Yang had not to successfully pioneered and advanced this form of photo album narrative.

Stories Then and Now - emerges not only from his precedent but under his auspices, in directorial partnership with writer and broadcaster Annette Shun Wah.

It presents the personal narratives of a series of Asian Australians, delivered in the Yang style, against a slideshow backdrop of family archive photos. Each piece is deftly scripted - concise, colourful, characterful. The skill of the writing and editing is clearly why the work has been linked to the OzAsia literary program, OzAsia on Page. Indeed, the show emerged under the umbrella of the Sydney Writers' Festival.

The pity of it all is that this inspired piece of programming was a one-performance only feature.  It is a show that should be seen by many for it explains so much of the background, the experiences and the cultural hurdles of Asian Australians. It should be televised. It should tour schools.

The idea of people standing at a microphone and telling their stories may not sing high entertainment but, with the tight editing and direction and the thoroughly interesting stories of the subjects along with their ability to tell them in a well-pitched and engrossing manner makes the show’s 80 minutes simply evaporate.

Each character makes two appearances, telling a family story of "then" and a personal story of "now". They are wildly different.

Jenevieve Chang is a dancer and former showgirl who begins with the tale of her aristocratic grandmother from Hunan whose good lifestyle in Shanghai was crushed by the arrival of communism and who married a nationalist peasant in a rush to escape marrying a communist soldier. She goes on to tell of her own very unusual, showbiz love life and her eventual settlement in Australia.   Author and academic Ien Ang' was born to high-achiever middle class parents in Java. Racism towards the Ethnic Chinese was such at the time that her family fled to start a new life Holland. Actor and academic Michael C.S. Park tells of a long ancestral trek from North Korea by his grandparents and the dominant role of "Big Auntie" in running his mother's life while Willa Zheng who, in coming to Australia as a child, so envied school friends having roles in weddings that she ended up becoming a celebrant. Author and academic Paul van Reyk describes himself as a Sir Lankan "Burgher Bugger", setting a humorous spirit for his narrative. He is a gay man who has become something of a legend in the sperm donor world.

These fascinating cross-generational presentations were embellished by music from Nicholas Ng and, with good sound and lighting, the Banquet Room worked perfectly for the presentation.
The audience response was tumultuously enthusiastic.