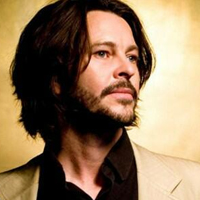 In more ways than one, it’s been quite a while between drinks for former Powderfinger frontman Bernard Fanning. While riding high on the deserved successes of his band, the Brisbane boy ventured out for a solo foray, ‘Tea & Sympathy’, way back in 2005. That makes it eight-years between solo albums, with his new effort ‘Departures’ just released a few weeks back. Of course, Bernard was busy with his band for many of those eight years, but even so, it’s been a few years since he graced Adelaide stages for the Powderfinger farewell in November 2010.

Bernard’s first tour post-Powderfinger was both an important event and one that I eagerly anticipated. Interestingly, I decided to avoid Bernard’s new album until after the concert (with the exception of the single ‘Battleships’, which I’d caught a glimpse of and rather enjoyed!) so that I’d be able to listen to the new material with fresh ears. And those fresh ears were definitely impressed by what they heard!

Excited by the prospect of hearing some new music from Fanning I moseyed down to Thebarton and, following my Thebbie tradition of a tasty dinner at the Abyssinian just down the road, I managed to catch a bit of the opening act, Vance Joy a solo acoustic guitar and ukulele-toting singer-songwriter plying his trade well. I also caught a glimpse of the second support act, Big Scary; feeling a little fearful of the slow melodic tunes I gathered some sustenance, for the upcoming main act, at the bar.

It wasn’t long before it was Bernard Fanning’s turn to grace the stage and, to the delight of the large and enthusiastic crowd, he came out with his band and opened in fine fashion with ‘Hope & Validation’ from his ‘Tea & Sympathy’ album; a nice choice. The grooving melodic album track was amped up with a more rocky edge, setting a nice pace for things to come; I knew this was going to be a good show!

The new tune ‘Battleships’ was next cab off the rank and demonstrated Bernard’s return to a rocking style, akin to Powderfinger’s ‘Vulture Street’. A very welcome transition, I say! There were soaring guitar solos, pumping riffs, grooving bluesy vocals, and even a hard hitting bass solo - all within the first couple of tunes! Bernard, who was celebrating his birthday with us, said the show would be a mix of new and old tunes and indeed it was, but I’m pleased to note that it was so much more than regurgitating album tracks.

Old tune ‘Believe’ was up next and it had a decent rock makeover, giving it a totally different dynamic to the familiar album tune. Similarly, the melodic opener of Bernard’s ‘Tea & Sympathy’, the excellent mandolin-laden ‘Thrill Is Gone’, had a nice dose of rock edge, with Bernard on acoustic guitar duties, and was accompanied by some live mandolin, adding to the effect.

Bernard stayed on the acoustic for a few more familiar tunes, including the beautiful ‘Songbird’, bluesy ‘Not Finished Just Yet’, and an incredible soft new tune where everyone managed to stay quiet, allowing Bernard’s soulfulness to shine through (apart from a bizarre crowd heckle early in the piece which Bernard took in his stride, stopped, had a chat, then continued in peace).

Fanning was back on the electric guitar for the rocking ‘Which Way Home?’, signalling a return to the rockier side of life for the rest of the set. To finish proceedings he decided we’d celebrate his birthday with a brilliant new tune, an old school blues romp called ‘Here Comes The Sadist’, building to a huge crescendo with the repeated line ‘Save My Soul’ getting the entire crowd on their feet and cheering. Definitely a brilliant end to the set!

The crowd was not content to leave it at that however, and after much cheering Bernard returned to the stage and, as he sat down alone at the keyboard, we sung him a happy birthday! With a big smile on his face he began the encore set with the beautiful, quiet ‘Watch Over Me’, before ramping things up with the rest of the band on the hit tune ‘Wish You Well’. Alas there was only time for one more so Bernard and co. decided to end things in mighty fashion with a cover of George Harrison’s ‘What Is Life’, complete with interludes of The Beatles’ ‘Birthday’ for good measure. What an end, and what an excellent show!

Oh, and I bought the CD right after the show and have continued to enjoy the rockier side of Bernard’s musical career… here’s to many more such shows and albums!