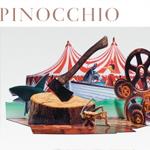 This world premiere of playwright Julianne O’Brien’s Pinocchio is not much of what Carlo Collodi suggested in 1883 but that’s progress for you.  O’Brien’s Pinocchio is a born impish brat, more Frankenstein for his inability to socialise.  It seems maybe we are all born mean and incompetent and need a crisis to pull ourselves together.  Unfortunately this is not a new story.

What I did like, though, were the excellent performances and staging effects.  Alirio Zavarce as the Venezuelan puppet maker domiciled in some unidentifiable city carried all the necessary emotional import sporting his cartoonish vestments and moustache.  Nathan O’Keefe’s performance as the boy-puppet was anything but wooden – he is a consummate performer.  The extending nose device looked ill-fitting and was mere gimmickry instead of contributing to life’s lessons learned.  Danielle Catanzariti was up-to-date sweet as the Blue Fairy but why did she have to be dead?  That was a bit morbid.  I couldn’t tell the Cat from the Fox – both Jude Henshall and Derik Lynch wore ermine tails and acted like they were transiting between night clubs.  The cricket conscience, while admirably engineered, and voiced, by Sam Routledge was superfluous.  Geoff Revell was an excellent villain.  Loved the visuals by Jonathon Oxlade and a large creative team.

Director and creator Rosemary Myers provided an entertaining variety of amusements but what was that all about?

When: 8 to 29 Jul
Where: The Dunstan Playhouse
Bookings: bass.net.au