Featuring as part of the Street Theatre’s ‘Solo at the Street’ series, Wish I’d Said That is a beautifully framed glimpse into the rear-view mirror of an ageing man shouldering a lifetime of regrets.

Jo Bleakley (played by veteran actor Henri Szeps) is a former actor living in the Foggadieu Retirement Village, rehearsing for his last comeback performance – a self-penned show for his fellow inmates in which he gets to channel the words and wisdom of all the great characters and legends he never got to play during his career.

But through these re-enactments Jo also reflects on the words he never got to say in his own life, and how these silent moments continue to haunt him - potentially sombre material, yes, but this show is far from gloomy. With real showmanship, the multi-talented Szeps strings the audience along with the kind of confidence and magnetism only a seasoned performer can afford, introducing (or reminding) the audience to some of the world’s most brilliant utterings with an obvious passion for the subject.

Jo opts for the wise, the funny, the complex and the 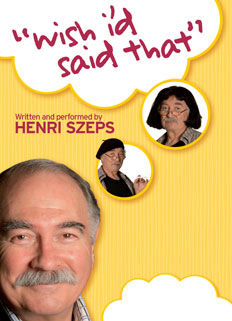 obscure; embodying those such as King Lear, Uncle Vanya, Sakini in the Teahouse of the August Moon, Edith Piaf, Mel Edison in The Prisoner of Second Avenue and Eric Morecambe, to name but a few. However, all the while he hesitantly and cautiously weaves himself into the production, and turns out to be just as a compelling character as those on his performance wish list.

This is truly thought-provoking theatre, with a subtle dose of slapstick and absurdism (and a few endearing grandpa jokes) that clearly delighted the evening’s onlookers - Szeps was magnificent and gave a generous and raw performance, with his choice of material timeless and completely relevant for today’s audience. There’s a great deal of depth in his writing, and the final product makes for a very soul-satisfying experience.

Wish I’d Said That is playing at The Street Theatre until April 21.

When: 12 to 21 Apr
Where: The Street Theatre
Bookings: www.thestreet.org.au