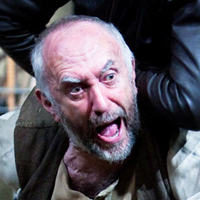 This is English theatre at its absolute best.  Harold Pinter wrote The Caretaker in 1960 – it was his sixth play, first commercial success and part of a large body of work that earned him the Nobel Prize in 2005.  While some categorise the play as theatre of the absurd, this production is fresh and relevant and nothing as obtuse as, say, Beckett’s Waiting For Godot.  A man saves a tramp from a beating and invites him to stay in his skid row flat.  The tramp is later surprised by the man’s brother who also has a claim on the flat and treats the visitor quite differently.

The performances and design are superbly executed to make the text easy to grasp.  Under Christopher Morahan’s direction, Pinter’s famous pauses, usually accompanied by excruciatingly boring inaction in the wrong hands, are filled where appropriate with physical nuance that greatly lift the characterisations.  Jonathan Pryce, whose famous face appears about to be twisted off his body in sidewalk posters all over Adelaide, is a consummate performer.  His tramp Davies flits from grumpiness and whiner to sassy confidence and noble hobo with ease and naturalism.

Alan Cox and Alex Hassell as the brothers are excellent, and an excellent pairing as the psychological shadow of each other.  The three men (is it three?) are constantly battling for the higher ground in a revolving grasp for dominance – the sudden and sharp charges keep the tension ever-present.  Set, lighting and costume design hallmark a highly polished presentation.  This production was first staged at the Everyman in 2009, so you have the opportunity to see a show where every tick of the eyebrow, every bit of the blocking, has been carefully designed yet it is presented with the freshness of opening night by a very experienced actors and creative team.  Bravo!

When: 16 to 20 Mar
Where: Her Majesty’s Theatre
Bookings: www.adelaidefestival.com.au