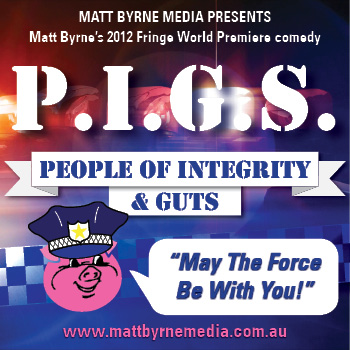 Only wild horses and P.I.G.S. could drag me away from WOMADelaide on a warm summer night.  But there I was, one minute, clapping away to Sharon Shannon’s Big Band, and the next I am in the cozy cramped and crowded quarters of Maxim’s Wine Bar at the newest Matt Byrne review.

Besides all the other pavlova Matt Bryne produces, writes, directs and/or performs in, there is now a considerable canon of skit shows focusing on somebody.  It started with Bouncers and Shakers well over ten years ago and after saying, “I could write that!” – Byrne’s written and workshopped the rest.  There was the fabulous Barrackers, the jab-ridden Pricks (hospitals and nurses), Chalkies (teachers and schools), WAGS (Wives and Girlfriends), and now P.I.G.S is roasting the coppers in this year’s Fringe.  What’s next?  Geologists?  But the smart money is that Byrne will continue to tribute the front line of the public service and find the humour therein.

The cop shop of Prospect Hump is under the command of a sergeant played by Byrne.  On duty is a raw recruit, and both male and female experienced constables.  Scottish Inspector Watta McKnob assesses the Hump’s habits in the second act.

Shenanigans aside, a great strength of the show is the air of authenticity about what cops think about.  While Brendan Cooney’s recruit is necessarily a bit Gilligan’s Island, Byrne, Njal Venning and Kim York come up trumps as top cops.  Their star turns providing some insights into police work - end of shift calls to car crashes, self-interest, what makes a cop a cop, and some seedy encounters - are all gems.  The members of the public they play are as vivid as the coppers.

Byrne as McKnob does a wonderful bit of stand-up banter with the front row and inveigled captivating audience participation.  And why don’t you do some stand-up, Byrne?  There are more surprises near the end of the show I can’t even describe.

Caps off to the coppers, Matt Byrne and his all-stars!

When: 13 to 18 Mar
Where: Maxim’s Wine Bar
Bookings: www.adelaidefringe.com.au