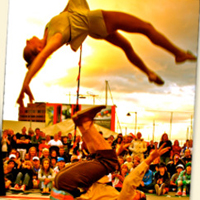 In the lead up to Womad 2012 Paul and Nicole spoke with Gareth Baajland about their show, being a circus performer and what to expect at this years Womad.

They are Tasmania’s brother and sister duo of Cessil and Sandy Pitt, with Incredible Underage Acrobat Wee Pitt, have a rare ability to twist themselves into knots as their audience doubles over with laughter. Fusing highly skilled acrobatics with unusual juggling, bizarre contortion and offbeat humour, this modest circus has wowed audiences in 14 countries.

Brought up in Cox Bight, an Isolated part of Tasmania, brother and sister duo Cecil and Sandy Pitt are eccentric vaudevillian acrobatic performers.

Their inspiration comes from comedy, slapstick, theatre and circus traditions and their show is a non-stop barrage of spectacular acrobatics, feats of comical contortion, odd-ball sight gags and engaging audience interactions.

From fast paced knock-about acrobatics to slow balletic adagio they take their audience on a roller-coaster ride into the bizarre world of a not-so traditional circus family in which things don't always go as planned ....

What: The Pitts Family Circus
Where: Womadelaide - Sounds of the Planet, Botanic Park
When: 9 to 12 Mar
Bookings: www.womadelaide.com.au