Often I Find that I am Naked 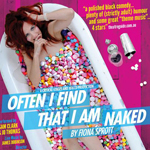 Internet dating, speed dating, stalking, drunken pity sex, seedy sex, commitment-phobes and men in the closet – Jezebel has been there, done that and then some - and she has a cabaret show to prove it.

Strictly an adults-only affair, Often I Find that I am Naked follows the foibles of a candid thirty-something career woman, negotiating the comedy, tragedy and absurdity of the modern singles scene and the exhausting quest to find the right romantic fit.

Jo Thomas gives a delightfully sassy and confident performance as Jezebel, while displaying an aptness for breaking all taboos of polite conversation in such a sweet and dignified way, that even the socially conservative would feel at ease with her lewdness.

The supporting cast too is outstanding – Sam Clark doesn’t skip a beat switching characters while playing the numerous and rapidly changing roles of Jezebel’s love interests and one-time leg humper, with the on-stage chemistry between him and Jo Thomas intriguing no matter what type of relationship combination throws them together.

Multi-talented James Dobinson wryly narrates the evening with his vocal and musical witticisms, utilising ukulele, piano and electric keyboard to indiscreetly underscore Jezebels’s trials and tribulations and also doubling as Jezebel’s sympathetic, slightly bemused barman during the low points of her escapades.

The comedic timing of this ensemble is as finely tuned as Dobinson’s piano, with the sight gags hilariously executed and the dialogue sharp and snappy. The simplicity of the boudoir setting and minimal casting magnifies the sublime talent of all who grace the stage, with every inch of space impregnated with presence and energy.

While most people are fairly familiar with the plight of the single lady through numerous popular TV shows, films and songs on the topic, there is a freshness about this show which makes even the most overused dating stereotype seem timeless and endlessly amusing. This show pulled all the right strings of the audience judging from all the hoots and enthusiastic nodding of heads from both men and women alike.

Often I Find that I am Naked is an absolutely pleasurable night out, with a little piece of something from the dating world for most everyone to relate to.