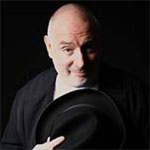 You don’t need ever to have seen Shakespeare’s Merchant of Venice to enjoy Guy Masterson in Shylock.  The actor who has performed in previous fringes in Under Milk Wood and Animal Farm is just as dynamic in this monologue written and directed by Gareth Armstrong.

Masterson plays Tubal, friend of Shylock in the famous play.  Dressed in suitable Venetian or whatever attire, Tubal entwines the history of the performance of Shylock with the even older history of Jewry in Great Britain.
It is unlikely Shakespeare even met a Jew because they were banned - interesting stuff like that.  Tubal recites Shylock’s famous lines in the play giving in brief the entire plot including the play’s origins.

Masterson creates the atmosphere of a full production, he singlehandedly does the dialogue of both Portia and Shylock in the climatic courtroom scene.  He is no longer a young man yet he performs with impressive physicality and with dancing magical gestures.  Masterson’s only weak spot is a loss of volume at the end of many lines where his vocalisation turns to a hoarse breathiness.

There is so much fascinating information that the show has an intermission, but never a dull moment.  Put together a few shekels for this one.