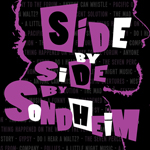 Side by Side by Sondheim.

Sondheim is an incredibly well known composer, who is responsible for music from some of the most loved musicals of all time. Think; 'Gypsy', 'Follies', 'West Side Story', 'A Funny Thing Happened on the way to the Forum' and 'A Little Night Music'.
Side by Side is basically a song cycle. It is a group of Sondheim’s songs performed in sequence with narration from the performers used to formulate a story with a historical element incorporated.

Despite the fact director Kate Anolak had cast the show with many talented amateur performers, it was very difficult to find anything to like. The production appeared under rehearsed, which may have been a symptom of running such a short season – only 3 shows.

There were a lot of directorial issues which probably should have been ironed out before the show had an audience. Decisions such as actors speaking with accents or without during narration should have been streamlined and the use of props should have either been committed to or completely mimed, for example, carrying a glass that isn’t referred to, whilst acknowledging an invisible cigar is just confusing. Voices were also mismatched, the only recognisable reason being the equal sharing of parts. Unfortunately many of the duo’s and trio’s did not have complimentary voices.

Volume was also a major issue and many of the performers could not be understood. One audience member commented that they expected to recognise more of the songs, which highlighted how necessary it was for us to be able to understand the lyric – since the numbers were often unfamiliar.

There were some individuals who performed standout songs. “You Could Drive a Person Crazy” just before interval was one of the highlights of the show. Lucy Carey, Lauren Scarfe and Emma Bargery sang beautifully and their voices were a perfect match in this number. April Stuart’s rendition of “Send in the Clowns” was also marvelous, and the audience gave due appreciation. Cara Brown stood out singing “Ah, Paree!” and Bethany Ide sang wonderfully in Barcelona. Lucy Carey gave a great performance in “Broadway Baby” and had great acting focus in the rest of the show. Of the boys, Timothy Ide and Mark DeLaine both had good fun with their roles. Their distinctly different voices were both solid throughout. Callum Byrne was a little inconsistent, ranging from excellent to not so good.

This production has a wide range of song styles and requires a very versatile cast. Many of the performers clearly stood out in their perfected range, but came unstuck when they were required to stretch vocally. One can only assume a short rehearsal period led up to the opening of this show, as both lyrics and dialogue were often fumbled or forgotten.

Much more polish is needed to wipe away the ‘deer in the headlights’ look which dominated the first half of the show. Plenty of potential, sadly not revealed in time for an audience.