An Experiment with an Air Pump 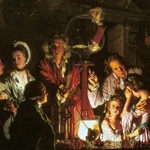 This piece concerns itself with a lot of issues, both moral and ethical, and demands the attention of the audience and great stamina and understanding from the actors to deliver its message effectively.

The story is based on the 1767 painting “An experiment on a Bird in the Air Pump” by Joseph Wright, whose works often depicted scientific subjects. It begins in a tableau created by the actors which portrays the painting. To cement this message to the audience, designer Ole Wiebkin has depicted a copy of this famous work, in his own unique style, as part of the backdrop to the set.

The fundamental theme centre’s around the turn of two centuries, with action set in both. The first in the year 1799, at the beginning of the Industrial revolution. The second in 1999, at the dawning of the Age of Biotechnology. In each century the characters are conflicted by their moral responsibilities to the growth and development of humanity through science and their ethical responsibilities as human beings. Cleverly interwoven into this story is the issue of the role of women. The evolution of man over 200 years is obvious in the juxtaposition of the female characters, and their comparative importance in each century. The playwright has challenged the audience with ideas, the piece doesn’t give answers, just opinions, and agree or disagree you’re guaranteed to leave thinking about it.

The action jumps back and forth between the centuries frequently and at times the audience could be forgiven for wondering in what direction the playwright was heading with the story. But the actors handle this easily, albeit with a range of mediocre accents.

Pick any player and you have a fervent performance. Cheryl Douglas as ‘Isobel’ a young Scottish maid, is stanch as the educated domestic with a hunched back deformity. Alison Scharber as ‘Harriet’ and ‘Kate’ and Amy Hutchison as ‘Maria’ both show great determination to their characters pursuits and deliver intense and passionate performances. Christopher Leech as ‘Fenwick’ is defiant and revolutionary in stark contrast to his ‘Tom’ who has resigned to his retrenchment, and Aldo Longbardi portrays wonderfully disparate performances as ‘Armstrong’ and ‘Phil’, two characters who couldn’t be more dissimilar from each other. Ben Brooker as ‘Roget’ and Sharon Malujlo as ‘Susannah’ and ‘Ellen’ round out this very talented cast.

The sound design by Maria Fava was effective and always complimented the action, though piece selection was not always married with the shows era. The lighting by Kim Littler was effective and gave dimension to Ole Wiebkin’s interesting set.

This show will give audiences much to think and talk about. See it.