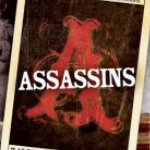 Sondheim’s Assassins opened December 18th, 1990 at the Playwrights Horizons, an off Broadway theatre in New York. This version for Flying Penguin Productions directed by David Mealor opened in the Space Theatre December 8th, 2007 and is the premiere of the show in Adelaide.

The story, based on the book by John Weidman gives a fictional account of the assassinations of US Presidents throughout history – set in a murderous carnival, the piece moves forwards and backwards in time, linking the common goals and disparities of 9 of histories most well know assassins.
The climax of the show comes during a surrealistic sequence where the assassins attempt to convince Lee Harvey Oswald that the murder of President JFK will give him the public recognition he deserves and will ratify the work of assassins of the past and future.

The set is designed to be reminiscent of the Wild West Show, staged events depicting American history, with a large stepped timber stage set amongst tents, through which the actors can make their entrances. A large projection screen is used to great success and connects the action on stage to famous images of history and artistic video footage, which conjugates the characters emotions with the mood of the sequence.

The all star cast and award winning director have produced and outstanding production of this thought provoking piece. Unfortunately at times the un-miked singers are difficult to hear over the orchestra. Cameron Goodall as ‘Balladeer’ and ‘Lee Harvey Oswald’ gives an energetic and considered performance. Christopher Matters as ‘John Wilkes Booth’ has a demanding presence and powerful operatic voice, but the dialogue is sometimes lost behind the thick southern accent. Stephen Sheehan as ‘Charles Guiteau ‘is dapper and appropriately nutty as the Oneidan assassin and Nathan O’Keefe is irreproachably nerdy and love struck as ‘John Hinkley’ – who we never see carry out his assassination attempt. Geoff Revell as the ‘Proprietor’ is suitably enigmatic filling multiple roles as radio announcer, techie, stage crew, and carnival leader to the assassins throughout.

Other exceptional performances come from Syd Brisbane as ‘Samuel Byck’ the dejected and psychotic Santa Clause and Michaela Cantwell as ‘Lynette “Squeaky” Fromme’ obsessed with Charles Manson and the idealistic destruction of humanity. Rory Walker shows great love and affection for Emma Goldman as the Anarchist ‘Leon Czolgosz’ and Peter Mitchell as ‘Giuseppe Zangara’ is delightfully murderous – blaming his attempted assassination of FDR on stomach pains. Bronwen James is uproariously funny as ‘Sarah Jane Moore’ and her scenes with Cantwell are clearly audience favorites. The ensemble is all very strong in multiple roles and the group numbers are harmoniously pleasant.

This very provocative show reveals a strange insight into the minds of our assassins. A must see.