The Madness of George III 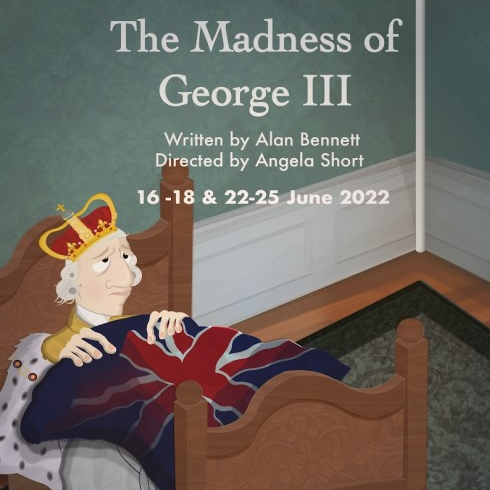 MGM has nothing on the cast of thousands involved in this Alan Bennett history drama.

The stage of The Arts is a spectacle of red coats, insignia, and period wigs. There are, indeed, Whigs in wigs and also Tories. Not to mention a king and queen and assorted attendants, valets, and doctors. The costuming of the show is an achievement in itself and the backstage must be swarming with dressers whisking the actors through their changes.

As the title suggests, this play tells about the mental illness of George III with a complaint known as porphyria but latterly suspected to be bipolar disorder.  As playwright Alan Bennett diagnoses the King for this partly-fictionalised play, it was the former ailment which is accompanied by a diversity of difficult symptoms such as fevers and chills, chest pains, constipation, itches, and purple urine.

With his signature comedic touch, Bennett has the poor King attended by a group of specialist doctors who plague him with torturous treatments. It is gently light relief and, indeed, there are a few laughs in assorted characterisations and quips. But mental illness itself is miserable and, as George III, Lindsay Dunn takes the audience into some dark and desperate places. In something of a bravura performance, Dunn takes the hapless king from blithe pukka authority through a decline of utter verbosity and irrationality and into a wilderness of escaped reality. It is a wild and cumbersome script, a huge ask of an actor, and Dunn’s mastery of it is truly impressive.

Around him is a royal court trying to stay out of disarray, a loyal German queen, and a loathed decadent oldest son who is being thrust towards the position of Regent by the strategising politicians of the day. The action zaps from royal household to bellowing parliament to doctors and, the king, the king, the king.

Actors carry added masks to create the full-scale rabble of Parliament and, under the direction of Angela Short, they sound all too familiar. Fashions may change but political shenanigans remain ever pushy, pithy, and pungent.

Short has rounded up some of Adelaide’s finest in the support line-up and they seem to be having a very good time on stage with their wigs and period costumes, poses and pretentions.  There’re about forty in the cast all told. Kate Anolak is particularly endearing as the German queen with Rebecca Kemp an agreeable power beside her. They get the best frocks, too.

Tom Tassone is farcically foppish as the self-indulgent Prince of Wales while, in a role with very few words, Jamie Wright holds his own beside him with a deliciously bemused reactive characterisation of the Duke of York. It is hard to take one’s eyes off him. Meanwhile, Joshua Coldwell, Peter Davies and Anthony Vawser make a merry meal of the assorted quacks with their blistering and bleeding and stools and rising gout. Leighton Vogt and Steve Marvanek offer portrayals of wiley politics, Jack Robins also with Maxwell Whigham right in there and, well, a mass of exquisitely competent women fulfilling myriad male roles: Jenny Allen, Leah Lowe, Rose Harvey, Heather Riley, Lucy Johnson, Chelsea Lancione among them with Jenny Allard partnering wittily with Rose Vallen as the pushy political provincials.

The set is simple but eminently regal - a stage divided into three sections, two with red velvet curtains opening onto the households of the king and the regent and a central raised orange curtain for affairs of state.  The king and queen roll in and out on a mighty royal bedstead. Doctors scamper about with chamber pots. A chambermaid flourishes a bed-warmer. Desks come and go as does the cruel chair of unseated power. Magnificent snatches of Handel punctuate the scenes; King George’s favourite composer don’t you know, what-what, and oh so regal and beautiful it is. Just the icing on a lavish period cake.