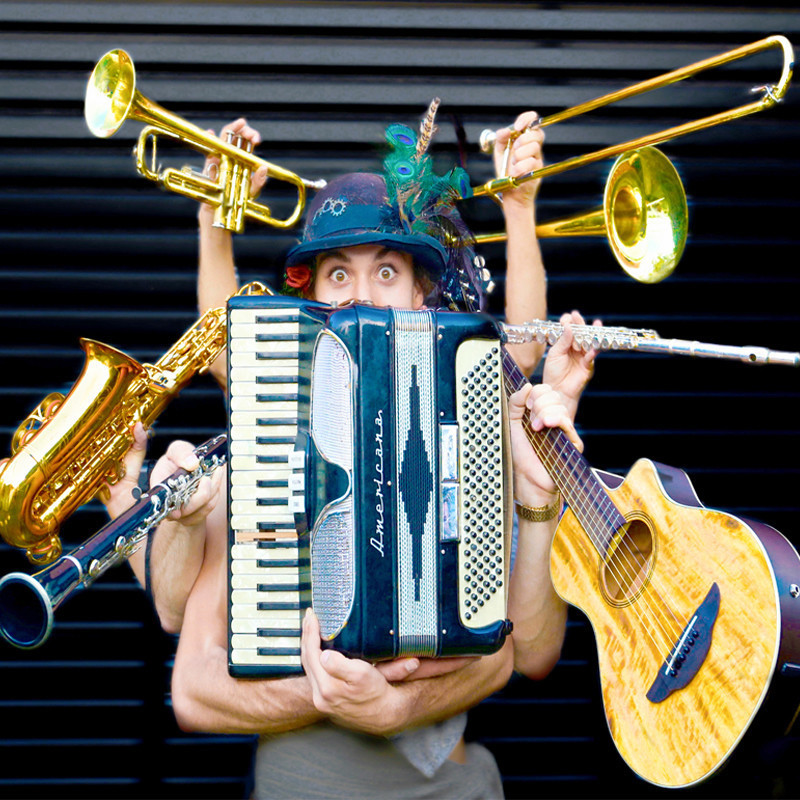 Don’t expect anything as fetchingly sophisticated as the multi-armed musician of the poster. This show comprises three goes at a Theatresports game making a shared yarn from audience suggestions. Which means three times 20 minutes of sustained improvisation - a big ask if you ever tried it (and why you haven’t?) Using a couple of movie titles or themes, or places and times, the eager-to-please team turn a few words into a blockbuster musical. At least, that’s the idea.

So what do you get when you cross - for example, in my viewing - The Devil Wears Prada with The Twilight Saga? The Prada Saga? Not the greatest in live entertainment, but a terrific showcase for the fine voice and acting of Dane McFarlane to shine as the powerful fashion magazine editor. He can sustain a whole bunch of spontaneous lines and sound like a rehearsed Broadway musical! Moving on, how about the suggested place of Boston with the time of 1776? The American Revolution was a bit more knowable and consequently flowed a little easier. English-raised Derek Tickner swaggered as an overconfident British officer and is ever-eager to jump in with some game changers. The aforementioned McFarlane created another hit character in George Washington’s mother. The ever-good natured Matt Eberhardt is the team’s spiritual leader and has fun with the challenge. On the other hand, Emma Losin seems happier coagulating in a corner, hiding her talent under a bushel. Whenever prised to centre stage, her eyes plea for assistance. Keylan Davidson goes with the flow well enough but lacks initiative. Thankfully, this is where Courteney Hooper tickling the keyboard keeps things moving. Hooper senses the thrust and parry and occasionally pounds out an introductory flourish inviting a thespian to break into song. In contrast, the fellow players are decidedly blunt, calling out, “Sing it!”

Improvisation is different every night, and every moment. Sometimes it’s gelignite, sometimes it’s gelatinous. The potential for genius is however hamstrung by an unevenly skilled team.

Where: The Sky Room at The Griffins