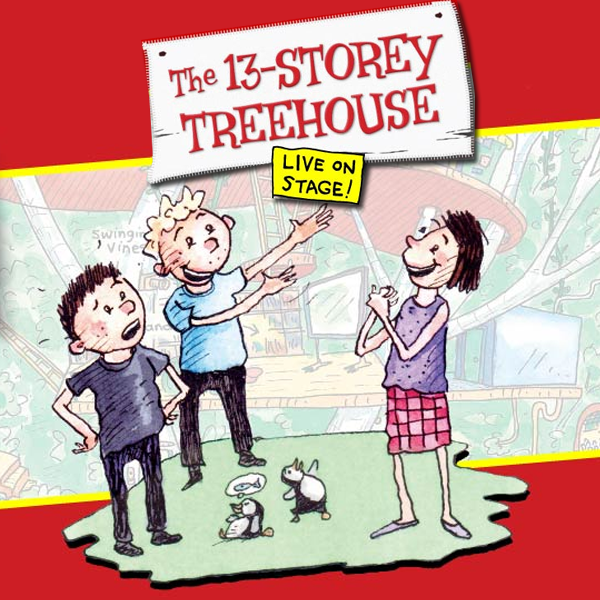 If you want to get an audience of 6 to 12 year olds involved from the get-go, farts will do it. Without fail. And lots of farts will get lots of laughs, especially different sounding ones. Yay for farts!

This adaptation of the first book in the Treehouse series (2011) opens with the theatre plunging into darkness. The kids are onto it immediately as Andy (Mathew Lee) and Terry (Teale Howie) flash their torches into the blackness, looking for each other and indeed the theatre itself. But wait! There’s an audience here! Why?!

Turns out that Andy and Terry have their dates wrong; this isn’t a rehearsal, it’s the performance! And Val (Rebecca Rolle), the ‘professional’ stage manager, wastes no time in letting them know what she thinks of ‘amateurs’!

Oh, dear. They haven’t rehearsed, there are no props, there are no other actors engaged and, oh yeah, they haven’t written the play yet! Mr Bignose will be furious and Val is horrified, but she rescues the day by suggesting that they use the book as a script, borrow some props and utilise the amazing ‘2D to 3D generator’. And so they do, introducing the loved characters and situations from the 13-Storey Treehouse. Terry paints Jill’s cat yellow, creating the catnary, and without other actors to help out, they persuade Val to take on the roles of Jill the neighbour (because Cate Blanchett had lost her voice), Bill the Postman (because Chris Hemsworth is having a band-aid removed under local anaesthetic) and so on.

Terry has made a start by drawing a finger, so there is no choice but to go with it, and Superfinger goes to the rescue – cue snot joke, and bodily functions wins again! Add in some Star Wars references, and you’re ticking all the boxes.

Lee and Howie play off each other brilliantly, including the young audience in their antics from the first torch light into the eyes. When Andy hypnotises Terry with a giant 3D banana (you had to be there) Howie shows off some great characterisations as he becomes a ballerina, a chicken and an idiot.

Rolle takes on her parts with gusto, with the ensemble working together smoothly on the simple girder construction set, and a couple of songs popped into the action doesn’t overly thrill the kids, but doesn’t really detract either.

The Treehouse books have become legend in the Aussie kids’ lexicon; any treehouse that boasts a bowling alley, a tank of man-eating sharks, a see through swimming pool and a secret underground laboratory has got to be a winner. The pair have gone OTT from day one with their books, and they’re now up to 143 storeys, with each floor getting wackier as the years go by.

Tulloch has adapted other books in the Treehouse series, but this is where it all begins. Although, as Barky finds out when he meets the gorilla, it was nearly where it all ends!