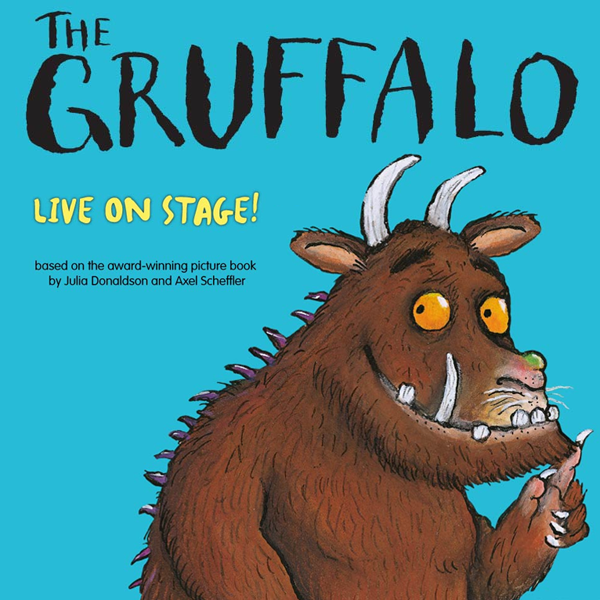 Contrary to popular perception, children can be hard audiences. This is never more so than when familiar characters are presented to them in an unfamiliar way.

Over the past 20 years, Julia Donaldson & Axel Scheffler’s The Gruffalo has become a staple in the children’s fiction genre. The story of the mouse who goes for a walk in the woods and escapes various predators by inventing an even scarier one has Best Bedtime Story (because kids are okay with having the billyoh scared out of them) and Best Picture Book amongst its many awards, and quite deservedly so. The 2009 film version, a half hour animated production, was both Academy Award and BAFTA nominated, and delights both young and old. And who wouldn’t love a film/book that picks up a whole new audience every five years or so?

The Gruffalo is now also a stage production, giving youngsters yet another version of the story. And I say another, because stage shows have to work that little bit harder than film to capture the attention of the three years-plus crowd. That The Gruffalo manages it (for the most part) is a testament to an ensemble of hard-working actors and a remarkable creative team.

Onto the simple woodsy set (a couple of gnarled trunks, some rocks, logs and a moveable hollow tree) comes Mouse, played (and sung, and danced) by Sophie Kleinschmidt. It takes the little ones a moment to adjust to this creature until, with the aid of the Narrator (Joshua Whitten) she develops ears and a tail. “Oh, there’s Mouse!” cries Little Miss Three, settling back on the prickled spine of her Gruffalo costume.

Fox, Owl and Snake are the three predators who attempt to lure Mouse into their respective lairs. The three are played by Tomas Kantor who, with the aid of some snappy jackets and headgear, takes on the persona of each of these creatures. None are more delightful to the children than Snake, who turns up as a Latino / Mexican mash-up complete with matador jacket, mariachi sequins and appalling but hilarious Spanglish accent.

It’s touches like this that make the show different enough to attract the children’s attention, along with the bonus of songs, and lots of ‘em. It’s almost Gruffalo the Musical. It does mean the very little ones drift off and get a bit restless, but that’s to be expected in any audience this age. Keeping them involved is always tricky, and this production knows the best way to do so; make them part of the action by giving them their own part to play. Yeah, kids love to roar and frighten people; ask any parent. Here they get to do it in spades.

It’s also notable that the adaptation has recognised that for every child in the audience, there’s a matching adult, who will also be watching this show for an hour. Like many children’s tales these days (think Shrek, Toy Story et al.) there are enough double entendres and bons mots to keep the grownups chuckling along. Many of these are produced by Joshua Whitten as Narrator (and waiter, parrot, chicken, peacock, penguin and finally, Gruffalo) who has wonderful comic timing, at one point breaking the fourth wall to promote his varied skills and CV.

The rhyming narrative that is a feature of both book and film is not abandoned here but is tempered by the songs and physical comedy of the characters, which creates a new and different perspective to the tale. And while we know that Gruffalos love roasted fox, owl ice-cream and scrambled snake, who knew that the Gruffalo actually wanted to study art, and ancient Greece? Sadly, that’s NOT what Gruffalos do.