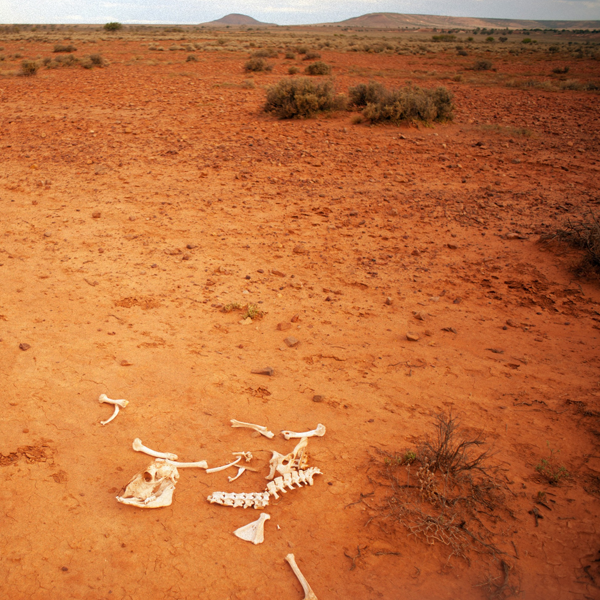 Snakes are the least and the most danger in this dystopian and slightly absurdist theatre work from Writer and Director Catherine Fitzgerald. Dry references the zeitgeist of climate change and the plight of refugees, while at the same time acknowledging the vagaries of a country such as ours; towns built in inhospitable locales, First Nations people moved on and the relationship with land. The snakes seem to move as metaphor amongst all of it.

It’s a big ask to do justice to all these issues, but Fitzgerald makes a good fist of it, utilising dark humour and effective character monologues. Two sisters, fiercely locked into their generational land ownership, remain as the last inhabitants of a drought ridden town that has been evacuated. Initially Klaus, husband of younger sister Ellen, stayed with them, but then he up and disappeared on his bicycle. ‘He’ll be back,’ opines younger sister, often. Godot.

Water, or its lack, dictates their existence, as they dole out by the cupful the meagre supplies that are desalinated from the nearby sea. Oddly enough, bar for the inevitable squabble over who is drinking more, and who should walk through the snakes to fetch more brine, water does not become the issue that breaks them; this is down to Patience hoarding and stealing food. Sweet, sweet tins of peaches from the cellar are their undoing.

The inappropriately named Patience is played by Eileen Darley with a light hand, which in the first instance disguises the obnoxious and selfish character that she is, and apparently has always been. Caroline Mignone, who at first appears the long-suffering younger sister, has her own survival issues to work through, not least of which includes payback to her elder sister, for food, for cruelty and ultimately, for Klaus.

The appearance of the refugee (Stephen Tongun) complicates the fracture that has appeared in the sisters’ relationship, and brings to the fore the casual racism with which they were raised, and the political naiveté that can affect the emotionally isolated. Fears of ‘the Capital’ are paramount, and supposition of what happened to the townspeople when they were taken by train become fact.

As the sisters sit at table, reflecting on their lot, they continue to observe the colonial niceties of lace tablecloths and tea sets, charmingly effected through Gaelle Mellis’ simple set design (realised by Katharine Sproul); as they observe more than once, tea should always be served in china cups. Behind them, forming the vista of the region, is Lighting Designer Nic Mollison’s projected backdrop; absolutely stunning photography from Alex Frayne is reflected large, washed in Mollison’s ochres and yellows, utilising what is a very deep stage space most effectively. Composer Catherine Oates seems to meander through these remarkable scenes, never taking too much focus but beautifully underpinning the work on stage.

There’s a contemporary art reflecting life narrative here that takes a while to come through; when it does, the stunning design stands in contradistinction to some of the ugly truths being exposed. Dry is at times uncomfortable, at times a bit clichéd, but it works hard to reflect a reality that is all too recognisable. Darley, Mignone and Tongun work very well together, inhabiting their characters with tenacity.

The ending is ultimately unsatisfying and leaves a sense of disappointment rather than of tragedy. As the three use a railway handcart to traverse what is revealed as increasingly desolate landscape, it becomes clear there is to be no salvation. Nonetheless Dry is an effective and timely piece of theatre from one of the best production crews the state has to offer.