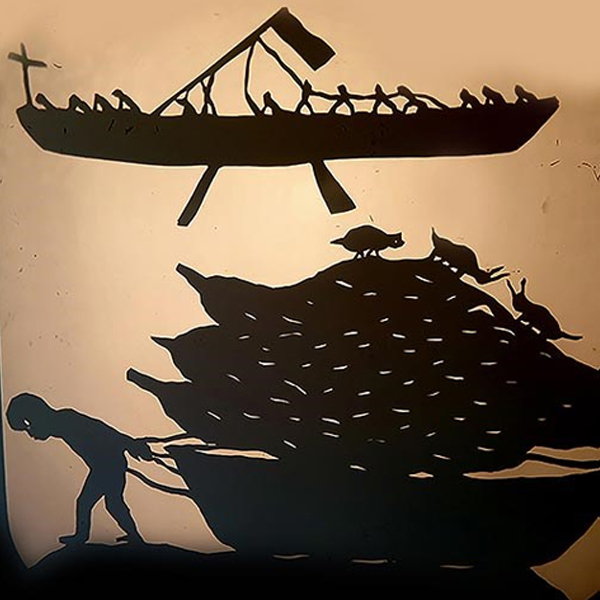 Wayang Kulit is an ancient tradition of Indonesian shadow puppetry usually telling the beloved sagas of the Ramayana or Mahabharata. They are usually performed with beautiful, intricate leather shadow puppets held on sticks and the plays are usually rather long.

This new variation on the theme of Indonesian shadow puppetry certainly does feel long.

It is a cross cultural phenomenon, a “contemporary Asian-Australian” production with images devised by celebrated artist Jumaadi and music by Michael Toisuta. It features silhouette cutouts illuminated via projectors onto double screens in the theatre; quite straightforward. Beside the screens, a group of musicians with a wild wealth of assorted instruments plays live onstage.

The show opens with an introduction sung perhaps pedanda-style by a dignified elderly Indonesian gentleman who then joins the band and features on classical Indonesian percussive instruments. There in the band is a female singer who is also an exquisite violinist and a snappy twister of a ratchet rattle. She occasionally translates Bahasa Indonesia snippets in song form. Two guitar-playing multi-instrumentalists are with her, focused and intense.  Much of the music is earnest and meditative and interestingly cross-cultural. One becomes fascinated by the daunting array of assorted instruments.

The performers are both Australian and Indonesian. The name, Perahu-Perahu, means “boats” and the story idea is to represent boat voyages between Australia and Indonesia over the very many years. It does, grimly, depict refugee boats and their drowned passengers. But, with very little in the way of written explanation, the audience is left to decipher what the hour of assorted enactments represents.  There are charming village folk at work and people climbing over mountains. One thread depicts the Dutch invasion of Indonesia and the subsequent struggles of the dreaded “Da Da” colonialism. Another seems to be about the importation of mangoes and durian.  The scene of fruit harvesting is charming. There is a sudden streak of politics with the portrayal of Australian cattle whose fate will be ill-treatment at the hands of Indonesian slaughterers. The show ends with lots of exuberantly celebratory music; “Opah Opah” cry the musicians and it is, of all things, a pineapple wedding. Strange, indeed.

It is a perplexing show. Is it cultural usurpation or is it brave new art? It sends one off to ponder the point. Jumaadi’s art, briefly shown onscreen at the opening of the show, is bright, lively, idiosyncratic, and highly appealing. There is a strong sense of his delightful designs in the Perahu-Perahu cutouts but, of course, they are shadow and rarely coloured. They also are highly reiterative. And, the storyline feels muddy.

As one who is au-fait with the traditions of wayang kulit, Perahu-Perahu comes across as an interesting interpretation of the genre but less fun than the real thing. There is no clown and the couple of gags slipped into the show are unfunny. It is certainly not “immersive” theatre as advertised but slow and, dare one say, obfuscatory for many.

Hence, while much of the music is interesting and the musicians clearly have a really good time, the message of Perahu-Perahu leaves one just a bit “bingung", as the Indonesians would say, or confused.