Stones in his Pockets 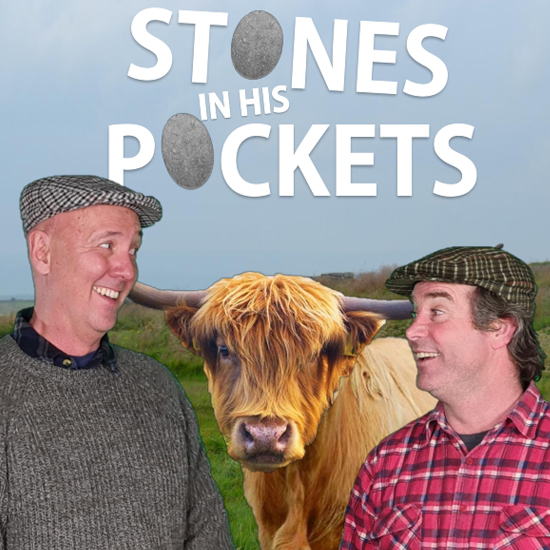 What a very clever confection of a lateral-thinker’s play. It’s a wild Irish gamble which comes off as a triumph. No wonder it won an Olivier Award during its four-year London run.

Written by Belfast-born playwright Marie Jones, Stones in his Pockets depicts a couple of impoverished Irish yokels working as extras on a Hollywood movie being shot on location on their home turf. Jones’s script demands of the two actors playing these roles that they embody the Hollywood film star, the film crew, and several of their fellow locals. Thus, being a massive quick-character-change challenge, it depends on the astute casting of two strong and versatile actors.  These director Joh Hartog has found in Brendan Cooney and Scott Nell.

They are onstage for two 50-minute acts in which, in a torrent of quick and often funny dialogue, they zap to and from fifteen diverse characters with assorted accents. It is exhausting just to think about it and even more so to watch, in utter amazement, as the actors actually do it - and well.

Phrases such as “tour de force” and “bravura performance” spring to mind. Then again, one can’t help thinking “ham” and “over-the-top” when it comes to some of the characters in the mix. It is all these things and also something of an actor’s masterclass, directed, as it is, by a noted drama lecturer.

For a play which is fundamentally oddball and satirical, it has a sad thread of suicide. The stones in his pockets refers to a local lad who drowns himself by weighting his pockets with stones. The where’s and whys of this would be plot-spoilers but it is so artfully embraced in the overall storyline that the work retains an upbeat spirit - and the audience leaves the theatre smiling. After all, everyone knows how pretentious film people can be and how they think the world revolves around what they are doing and what it costs. And, everyone can think of vapid Hollywood prima donnas. It’s wholesome to laugh about them and to explore the odd world of hapless extras.

There’s time for a titter about accents, too. Cooney and Nell have to turn on regional Irish accents, non-regional accents, American accents, English accents, and even how-to-do accents. If one thinks for a moment that they don’t have their accents quite right, it’s such a wild melange and quick-change party that one stops caring. Token character changes are executed by putting on and taking off caps, reversing them, popping on headphones, a scarf around the neck, all at lightning speed.

Fortunately the actors have the professional acuity of veteran lighting guru Steven Dean to have the lights playing in perfect co-ordination with their quick changes along with designer Tammy Boden’s clever costumes with their braces and big pockets. All this as well as the extremely agreeable and deceptively simple set convincing one that there is lots of room on the Bakehouse stage and that there are even green fields.

It’s all very nicely done. It’s a fast-and-furious quirky play featuring two of the most fearless, fit, and able actors in town. Unforgettable will be Brendan Cooney’s gorgeous physicality as a huge, beefy security guy.