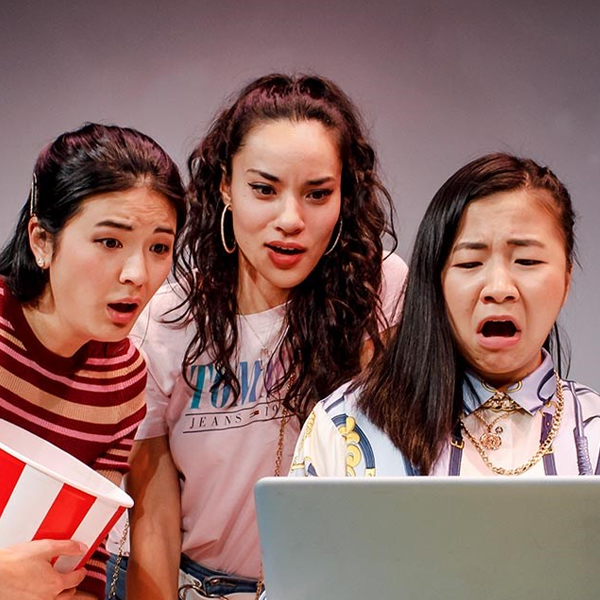 Anchuli Felicia King is a rising name on the world theatre scene and her play, White Pearl, which opened the OzAsia season this week, is a fast and furious portrayal of the views and values of young Asian women in the 2020s. She depicts them as sharp and clever, well educated, ambitious, and reaching out to the world stage but not yet quite liberated enough to own it.

White Pearl is a daring parody on the standards of the beauty culture, its eponymous title based on a new skin-whitening cream that an all-female cosmetics company has launched onto the Asian market where skin lightening long has been a beauty quest. King opens a vivid, sometimes comic, and sometimes touching insight into the cultural contrasts of Asia by making the company team a cross-national affair: one member is Singaporean, another Japanese, another Korean, Chinese, Indian  and Thai-American. Cast member Kristy Best embodies most eloquently the slippery CEO, Priya Singh, who brags that her company is entirely egalitarian with none of the toxicity of the male corporate world. This assertion is to unravel. Cheryl Ho provides delicious comic relief as her non-binary Singaporean “homey”, with Mayu Iwasaki as the Japanese marketing strategist, Yin Lin as the Korean cosmeceutical chemist, and Nicole Milinkovic as the vapid glamour queen of Thai American upbringing. It is she who lures into the plot the one extremely unlikeable predatory male, a Frenchman called Maurice, bravely played by Matthew Pearce. No spoilers here, but it is all a bit gross. Indeed, playwright King does not resile from the ugly side of anything. The ghastly racist overtones of the company’s scandalous ad evoke all sorts of references to Asian racial bias and ethnocentric presumptions generally. The script veers from satire to vulgarity, taking no prisoners when it comes to shock value.

The action takes place in the company headquarters in Singapore to which end the Jeremy Allen-designed  set shows a sleek corporate boardroom with a subtly mirrored back wall and, aloft, inspired by the playwright herself, an electronic counter which, accompanied by a blaze of tech sound effects, spits forth ever-growing numbers. These are indicating hits on social media as the company’s latest advertising push goes viral as a racist meme. Beneath the screen, the women scramble, bicker and bully to deal with the crisis and show that corporate crookedness and venality are not products of an exclusively male domain. Nor, as is rather graphically depicted, are women entirely liberated from male sexual shenanigans.

The play covers it all. Under the direction of Priscilla Jackman, it sings with fearlessly expletive-driven tongue-lashings and, with a ladies’ loo conveniently depicted prompt onstage, an unprecedented invasion into that purportedly private women’s world. Some of the ugliest and most beautiful of the play's scenes take place in that cleverly-wrought inner sanctum.

As the characteristics of each Asian nation emerge through the characters, so does the omnipresence of internet news and social media: the make-or-break ruling forces of today.

White Pearl is a fierce and audacious piece of theatre. It is fearlessly sardonic. It is alight with ideas and relevant on myriad very serious levels while still evoking laughter. If Anchuli Felicia King is a beacon for millennial theatre-writing, then we are in for a bright future.